When I fell pregnant only five months after my first daughter, L, was born, I was reassured by EVERYONE not to worry because my children would be the best of mates and that whilst the age gap would be initially difficult it would be worth it to see them happily play together when they got past the newborn stages.

It came as quite a disappointment, therefore, when having reached a stage of mobility (about eight months of age) coupled with an inherently curious nature, my youngest daughter, P, came up against enemy number one – her big sister (about 20 months)! 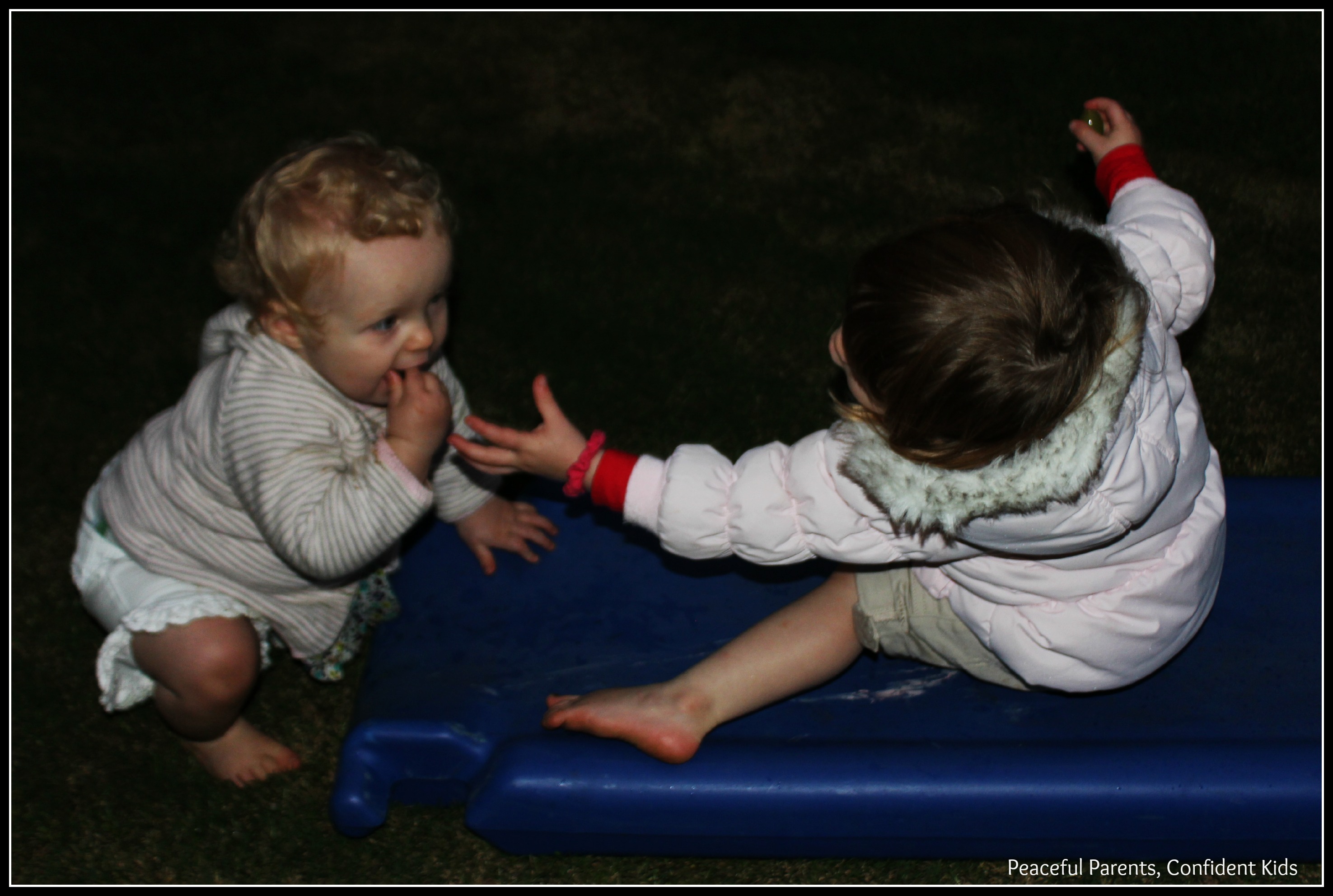 I guess I hadn’t really done the maths or I could have pre-empted this phase and perhaps coped better when it first hit us. L had reached the sensitive age of two just as P was beginning to investigate her surroundings using more tactile and explorative techniques than just sight, sound and smell. This combination was to prove to be a highly volatile one fraught with highly stressful situations, many tears and tantrums and a generally miserable household.

During this stage, it seemed that L possessed a rather egocentric view of the world menaing that whatever existed in our household was hers. If P had it, she wanted it. If P looked like wanting it, she wanted it and if she was already playing with it, P should not even look in her direction because it was hers and P couldn’t have it! Sharing was not something that L was interested in doing unless it was absolutely on her terms.

Luckily for us, unlike many other critical moments throughout our daughter’s infancy, we were by now fairly well versed in the RIE approaches. When I started to realise that this sharing drama was something that was going to be an issue in our household for the foreseeable future, I read up as much as I could on the best ways to handle these situations so that it was respectful of both our daughter’s needs and took into consideration both of their stages of development.

The overwhelming advice given for this exact situation was stay out of the conflict wherever possibly and to accept the toy taking as a normal part of the growing relationship between the two.  So following this advice, I allowed L take toys from P and I sportscast each occasion, following Magda Gerber’s guiding wisdom.

Initially, this played out as described in the examples I had read. L would see P with a toy, L would move to take the toy and P would seemingly, not mind and move onto a different toy.

After a short time, however, P, who was used to playing with single items for extended period of times, showed some annoyance at having her playthings taken. This grew to anger and then full blown distress anytime L even approached her play area.

It was at this point that my resolve to let them work through their conflicts themselves waned. I could see that P was never able to engage with anything that interested her for much longer than the time it took for L to notice that she had something and make her way straight over there.

It grew increasingly distressing when L would snatch things aggressively and then put them out of reach of P before returning to her own play. She was not interested in playing with these toys, she just simply did not want P to have them. I started trying to intervene in the girl’s struggles and did not allow L to take everything from P.

It was clear pretty quickly, however, that this was not effective either. When I would put a ‘block’ between L and the toy, she would then try to lash out at P. With increasing acts of violence occurring in these situations, I knew I needed to seek some help.

After contacting Janet Lansbury, an RIE specialist who trained under Madga Gerber, I received advice that helped me to reassess the situation before moving forward. I came to the realisation that there was more than one issue at play here. There was L’s perfectly normal egocentricity steering her behaviours as well as a deeper issue of sibling rivalry and jealousy that was the driving force behind her aggression and persistent interference in P’s play.

Armed with a newfound understanding of these behaviours, I began to approach the situations somewhat differently. Instead of seeing P as the sole victim in these conflicts, I began seeing L as a victim also. She was a victim of her own egocentricity as well as of another situation she was finding difficult to cope with – being a big sister.

So I reverted to allowing L the freedom to take P’s things from her whilst always commentating on the situations: “P had the trolley and now L has it. P is upset”. I could see the look of contemplation in L’s eyes as I spoke aloud the actions as they were occurring.

Gradually, I began to see small changes in L’s behaviour. Very occasionally, after careful thought in the aftermath of one of their exchanges, L would toss something P’s way and say: “Here you go, P”. This was a huge step for L and seemed so much more meaningful and authentic than me forcing her to get something for P or making her give a toy back to her.

At the same time I was practicing keeping my cool in what were often quite physical and emotional exchanges, I was working on helping L through some strong feelings surrounding her role as a sibling, a big sister. Janet Lansbury conveniently posted a fabulous article around this time, with some key points for helping transition toddlers into this role. She highlighted the need to acknowledge the feelings of the toddler, L, relating to the times when she felt the need to act out towards the baby, P. She also suggested bringing up the notion with Lucy that it is hard being a big sister sometimes and that I understand and want to help her.

“When children act-out with the baby — kissing or patting the baby too hard or jumping on the bed next to her — after calmly but confidently stating the boundary (“I can’t let you…”), the parent can ask matter-of-factly, “Are you feeling rough toward the baby right now? Are you upset that the baby’s here? Big sisters often feel that way. But I’m going to help you get down from the bed. I’d love for you to sit on my lap or jump on the floor next to me.”

b. Casually bring up the subject of negative feelings as often as possible: “Being a big sister is very hard sometimes. It’s normal to get angry at the baby or at mom or dad, feel sad, worry or just be upset and not know why. If you feel any of those things I want to know. I will always understand, love you and want to help you.”

The last strategy I employed in my quest to support my children through this tough phase of their childhood was probably the most critical. It was to develop immeasurable patience; realising that none of the strategies I was adopting were cures for fixing a sharing problem but rather tips for guiding my children safely and securely through their struggles so that when they were developmentally ready to share of their own volition, their relationship with each other would remain in tact and that their experiences at this time could be felt as opportunities to develop conflict resolution, negotiation and resilience without gaining feelings of resentment, shame or helplessness in the process.

A good five months since the sharing issue first arose in our household (one month since being more confident and resolute in our approach), there has been some truly astounding developments. We have noticed over the past couple of weeks some changes in P’s reactions to having her play things taken. Recently, P (12 months) was pushing her trolley around the house when L grabbed it and pushed it in the other direction. P immediately cried out loudly, clearly upset over having her trolley taken from her.

Within 20 seconds of the initial point of take over, with barely enough time to finish sportcasting the event, P stopped crying and moved quickly to another toy. L left the trolley and made for the new toy. P relinquished this toy without so much of a whimper before quickly darting back to the trolley and resuming pushing it around the house.

P has used every experience of having her toys taken to slowly develop a strategy that allows her to play with her toys in peace. This doesn’t always happen but it happens enough for us to know that it is not a coincidence.

More frequently now, we see L bringing things to P to play with, rather than taking her toys. We are careful not to fuel sibling rivalry with comparisons or taking sides in squabbles. By staying neutral and allowing the girls to work through their disagreements, they will become more attuned to each other’s needs and begin the makings of a strong relationship.

For more reading on this topic you may enjoy:

7 Things I Should Know About Helping my Children to Share (From my Toddler Coach) ~ Peaceful Parents, Confident Kids

31 thoughts on “Could NOT forcing a toddler to share help with sharing conflicts? (Part One)”