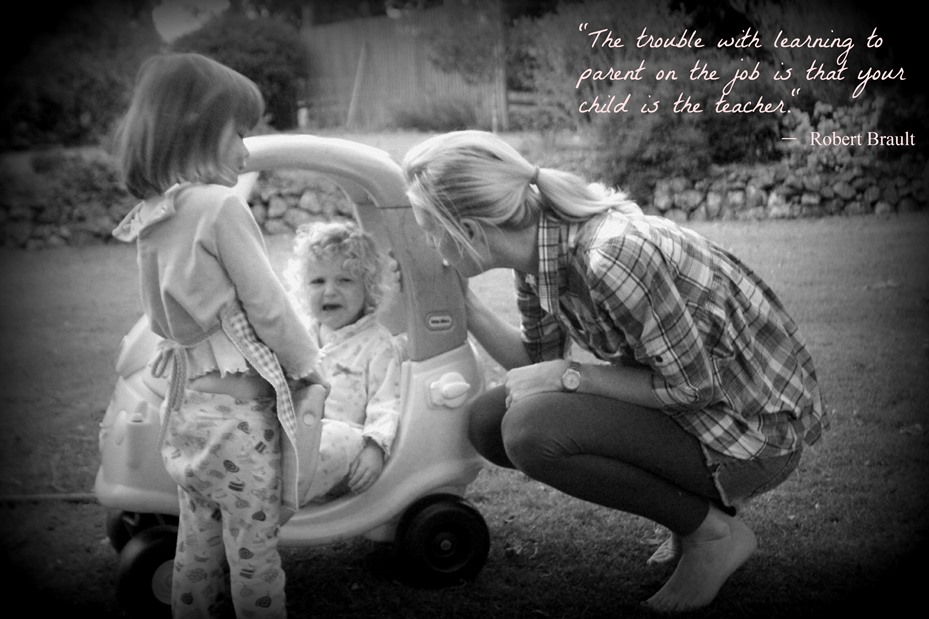 With two strong-willed children close in age, learning to share in our house has been a long and winding road. Following the wisdom of RIE founder, Magda Gerber, I have been lucky enough to be able to trust in the capabilities and strength of our children and allow them to work through their struggles fairly independently. There have been times, however, that I have struggled with the relentlessness of the battles and am grateful to have had my children patiently coaching me through this stage for as long as I needed.

After all the time, and effort I have spent training under my three year old coach, L, I should by now be considered an expert. L has put me through my paces and ensured that I have practiced diligently everyday for many exhausting hours! She has taught me so much over the past couple of years. Her training has been relentless and at times gruelling. Often I have felt like giving up but she has always believed in me, as all good coaches do, and I have always done my best not to let her down.

P, 22 months, now has the benefit of all I have learned from her older sister. She won’t have to put up with an amateur mother, bumbling her way through unknown territory. And whilst I know that I will continue to learn more each day under not one but now two coaches, I step forward boldly, comforted by the teachings of my original parenting coach.

These are some of the things my children have taught me about their sharing conflicts:

1. Possessiveness is a developmental trait, it is not my personality!

The lesson: Just because my child repeatedly takes toys from other children and won’t  let them play with the toys they are not using at that moment, does not mean that they are unkind, selfish or lacking in empathy. These are adult phenomenons and have no meaning to children. We find toy taking and hoarding uncomfortable because as adults existing in a fair society, we have a sense of justice which we have developed over our years of interactions with others.

Our children know none of this but will soon learn it, when they are ready. In the future they will not be snatching their work colleague’s ball point pen out of his hand just because they unreasonably think it is theirs – yes, even if they are not spanked every time they snatch as a child.

2. Give me some time and space to share and I will!

The lesson: I am still to this day dumbfounded when after a heated battle between my children over a particular hot item, the type of battle where it seems like the world is ending for both children and I have a hard time narrating the scene over the top of the high pitched screams enveloping the room, the child who ends up with the toy willingly hands it over to the other just moments later. My coach has taught me well that they are more likely to do this when they have not been pressured to do so and that the more I practice this technique, the more likely this is the resulting scenario.

3. Please be patient with me, I need to know you love me no matter what!

The Lesson: L has taught me through words, actions and body language that when she is at her worst, I need to be at my best, or at least seem like it. If I react to her turmoil or issues by sharing my own anger or frustration, what does she learn? How can she be sure of my love for her if it is conditional of her behaviours?

She is sensitive to my emotions and my reactions towards her. She becomes more unsettled and unsure of herself when I lose my patience and subsequently becomes more resolute in her possessiveness of everything in her vicinity. It is like she decides (as coach) that I need more practice so she gives me more challenges to get it right.

Yesterday, my children would not have an afternoon sleep. I was tired and growing more and more frustrated as the realisation dawned on me that I would not get a break and the children’s behaviour would likely deteriorate as tiredness set in.

As I prepared afternoon tea for them, L became upset firstly when P sat on her stool then when I gave P her apple first. P started whining that she wanted milk but got upset when I fetched her a cup instead of letting her get it herself.

Feeling my tension rising, I snappily said: “come and get a cup then” so both children started pulling every cup out of the cupboard trying to find the right one. My patience thinned when a third tower of cups spilled onto the floor and I grumpily said: “Choose a cup now or I will”! L finally handed me her cup so I took it and exasperatedly threw the cup I had originally chosen into the sink.

This was my way of trying to subtly release some of my frustrations but it was enough to send L into an emotional wreck. She cried real tears, pleading, “Don’t do that, Mummy!” and then continued sobbing whilst clinging to me for dear life, searching for me to be her rock again.

It took much strength on my part but I remembered my mantra: “She needs me to remain calm.” I said, “Okay, let’s pack up and go to the park.” It was enough to distract me from my own unsettled emotions and as we abandoned the spilled cups and headed to the car, we were all able to refresh in a new environment.

The Lesson: If my child is having a hard time sharing, it is very often something that they have little control over. As the parent, it is therefore important for me to remain on neutral ground when dealing with the situation. Casting blame, making guilt inducing comments or punishing possessive behaviour will only serve to make children not only disconnect from us but also resent the other child (usually their sibling).

The best way to stay neutral during sharing issues is to sportscast or narrate the situation as though we have no vested interest. “P, you had the doll and now L has it. You weren’t finished with that doll. You seem upset. L, you wanted to play with that doll, too.” The End! No need to add any more than that. No, “P’s upset because you took the doll from her” (blame) or, “Look, you made your sister cry” (guilt inducing) or even, “P was playing with that doll, give it back.” Leave it open so they have the opportunity to come to a natural conclusion. Basically – stay out of it!

5. When I say “Mine” I don’t always think it is actually mine!

The Lesson: When I was at the park yesterday, L and P were happily climbing up a wobbly bridge to a slide and repeating this over and over. The park was deserted so they had free reign for most of the afternoon. Another family eventually arrived with a small child about P’s age. He too began crawling across the wobbly bridge, pausing for a bit in the middle, seemingly unsure about the integrity of the structure.

P approached the bridge and assertively cried out “Mine!” to the little boy who sat there nonplussed. I stated “Are you telling the boy you would like to climb over the bridge?” To which Penny replied by nodding her head once and promptly making her way across the bridge and past the little boy. Had I replied to her, “That’s not your bridge” she would probably have looked at me confused 🙂

Another incident happened at Kindergym today. P was bouncing on a mini trampoline when another child (about three years old) came running up, vehemently exclaiming “mine!” whilst grabbing at the edge of the trampoline. Her mother rushed up behind her and fiercely apologised to me, letting out an, “I don’t know what’s got into her today.” I replied  “That’s okay.” and then to the girl, “Were you letting P know you would like to have a turn when she is finished?” The girl did not reply but patiently stood there for a few moments before P voluntarily climbed down from the trampoline and stood waiting happily for the girl to have her turn before climbing back on.

To Learn More: Mine, Mine, Mine! What if Your Child Doesn’t Share ~ Education.com

6. Please speak to me at my height, you can be scary all the way up there!

The Lesson: It is pointless trying to communicate to my children from twice their height away. The message trying to be conveyed just seems to get lost on its way down. I know as an adult I find it disconcerting talking to a friend when I am sitting down and they are standing up. I always feel the need to stand to create that direct, receptive line of communication.

For children it can also be quite intimidating for them, especially if they feel they have done something they are worried about. If we get down to the child’s level they will be far more receptive to what we have to say. This also includes calling out from across the kitchen in a bid to break up the fighting. Children will hear nothing in these situations unless we are in their proximity and eye line.

7. When I am really struggling to share, I may need my own space for a while!

The Lesson: This has been a more recent lesson for us and although it took us a long time to learn this one, now that we understand our daughters’ need for space, we have been able to offer it to them whenever necessary. Both our children now regularly remove themselves from the room when they can feel it is getting too much. They play happily away from each other for a while before naturally gravitating back to each other and engaging in beautiful, cooperative play for extended periods.

I know there are many more lessons still to learn on this topic and I look forward to the challenges my coaches have in store for me.