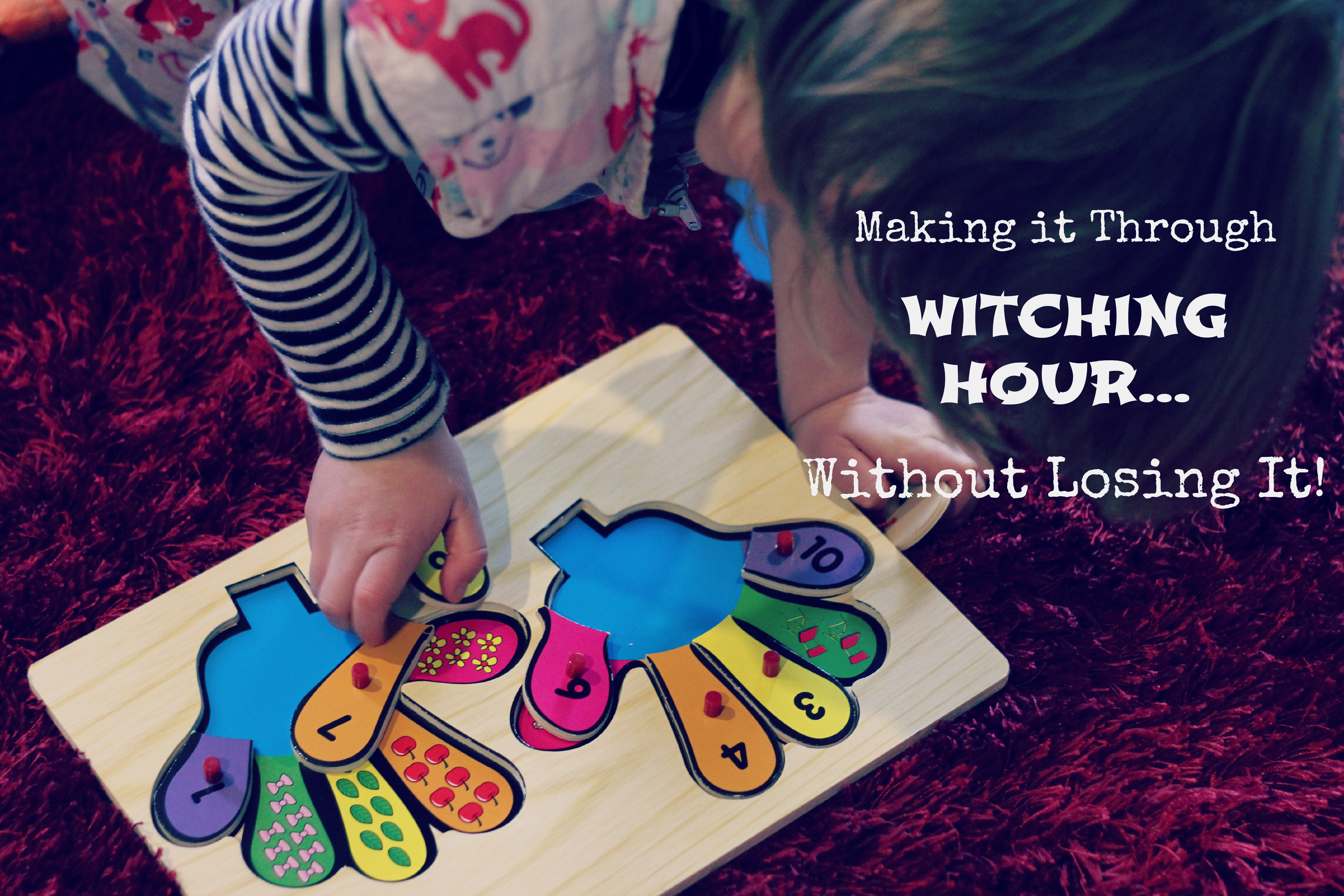 I often wonder what our neighbours think we are doing to our children as their screams echo around the walls of our house during the afternoon witching or arsenic hour as it is commonly known. As much as we thoroughly prepare for this time of the day, rarely are my children able to remain cool, calm or collected as we work towards the evening meal, bath and ultimately, bedtime. I have learned to let go of my worries about the neighbours. I know that as long as I am able to remain cool, calm and collected, my children’s emotional releases are healthy, normal and an important part of a toddler’s development.

In the past though, I would be on the phone to my husband every five minutes from about 4pm onwards, getting an update on his eta. I found the meltdowns difficult to handle and impossible to stay unruffled through. Now, I am finding a strength in my resolve to be confident, peaceful and firm during these times that I never thought I had in me. My eldest daughter put me through a pretty gruelling test recently when she melted down just before dinner. This is how I made it through unruffled.

The first and most important thing was that I was prepared. Staying calm is always hardest when you are taken off guard and caught by surprise. I knew this time was approaching, as I do everyday. I had made a batch of bolognaise sauce on the weekend which just needed heating so all I needed to do was to pop some spaghetti in some boiling water to cook. Dinner time is between 5:00 and 5:30 in our house (this is as early as we can make it usually) so as 4:30 approached and I heard intolerance build in my children’s interactions I decided to put the pot on the stove a little earlier than normal.

Sure enough, just as the water started boiling I had both children raiding the pantry for some cereal. Obviously, it was too close to dinner for more snacks so I had to get them through 10 -15 mins before I could have dinner on the table. Sending them away to play was not going to happen, so I set the timer for 10 minutes for the spaghetti to cook and gave the girls some wants nothing quality time. I took them to the lounge for some pre-dinner dancing. We turned on Pandora for some bopping music and danced together for about 5 minutes before the girls raided the puzzle drawer and settled in for some puzzle time on their own. I was able to duck away at this point to serve up the dinner and set it at the table all ready for the girls.

Tiredness overcame my eldest during dinner (as it often does). She asked for/ demanded some milk and I rephrased this for her, “May I have some milk please, Mum?” I gave her a small amount in a cup which she quickly gulped down. She whined “I want some moooore!”. I set an expectation that she eat her dinner before having more milk as I didn’t want her filling up on just milk. She repeatedly screamed for milk. Sitting by her, I acknowledged, “I hear you asking for some more milk. You may have some when you have eaten your dinner.” As her screams continued I validated her emotions “Wow! You are really upset that I am not giving you any milk. It can be hard to wait.” In my head I kept repeating to myself my mantra, “She needs me to be calm.”

She eventually calmed but wouldn’t eat. Instead she pushed the food around her plate and then eventually slid off her chair and underneath the table. I set the limit, “Lucy, you have left your chair. Are you telling me you are done with your dinner?” “NO!” came the reply as she scrambled back up. I reminded her: “I would like you to stay sitting on your chair for dinner. When you leave your chair, you are telling me you have had enough to eat so I will take your plate away.”

Lucy squirmed around on her chair for a while longer before climbing down again to retrieve a book from the bookshelf. I told her I could see she was done with her dinner and that I would remove her plate. She screamed and ran after me, clawing to have her plate back. I explained that she had left the table and her dinner was going away. I let her know it was bath time now and acknowledged, “You seem disappointed that you are not able to eat your dinner. After your bath you might feel a little more hungry and you could try again.” (I don’t always offer the eat later option but tonight I felt her emotions were getting in the way of her eating and that given some time to release these emotions, she may be able to eat more peacefully)

As I ran the waters for her bath I took some deep breaths and reminded myself how hard this was for her. I resolved to support her through it and calculated that I only had just over an hour until she would be soundly tucked up in bed and I would be able to have a much needed shower and cuppa in peace. I think of it like an hour until I clock off from work. This works for me at this time of day but I try not to count down from too early on or it can have the reverse effect!

Through Lucy’s bath, the testing behaviour continued. it was clear to me that a mixture of tiredness, hunger and possibly some pent up emotions were rendering her irrational. She asked for some blue colour in her bath which I happily obliged. However, as the blue drops landed in her bath and swirled out in spectacular patterns, she screamed, “No not blue, RED!!” I had not misheard her, she had changed her mind which is what she often does when her rational brain begins spiralling out of control. It is as though she wants to create an issue worthy of her spilling out her emotions.  This was a sure sign for me that she desperately needed help.

I acknowledged “You don’t want blue in the bath. You really want red. I can put some red in with the blue if you’d like?” But she wasn’t listening “GET THAT BLUE OUT!” Came the scream as she madly started scooping water out of the bath tub, all over the floor and me. Now soaking wet, I could feel my patience waning. I needed to get her out but I needed to do so respectfully. I blocked Lucy’s frantic hands from splashing the water and calmly explained that the water needed to stay in the bath and that I would help her by holding her hands. She fought and became very agitated with me, screaming at me to let go.

“I hear you asking me to let go. If you splash the water, you are telling me you are done having a bath and I will have to help you out.” As soon as I let go of her hands she splashed the water at me once more. I explained, “Bath time is over. I will now lift you out of the bath.” She needed me to take control and over her screams of protest I spoke to her (but really I spoke to myself). This was how I was going to stay calm. “You are tired and hungry. You are having a hard time making decisions so I am going to help you by taking charge. It is so hard for you in afternoons sometimes but I want you to know that I am here for you and I want to help you. I will keep you safe.”

Now I don’t know how much she took in but saying these things definitely allowed me to keep a compassionate, confident demeanour which is what she desperately needed. This would have given her a sense of relief in my ability to parent her even when the going got tough.

I wrapped her in a towel and carried her to her bedroom. Here she was in a safe space where we could both sit and she could freely express the emotions that were taking over her little body. It wasn’t long before her wails of anger turned to healing sobs as the cortisol flushing through her body dissipated. Finally these turned to relieved sniffles. She crawled into my lap and physically relaxed as I stroked her back and told her I loved her and would always do so. She became so still that I thought she was falling asleep right then and there but eventually a little voice squeaked, “I’m hungry. Could I please have my dinner now?” I replied, “Sure, let’s get dressed.” She willingly did so and then went to eat her dinner with her Father who had by then arrived home.

When she finished she announced that she would like to go to bed (an hour earlier than her usual 7:00 bed time) so we took her to bed and she drifted off happily as I read to her.

I breathed a deep sigh of relief as I put the kettle on and slumped into the lounge chair. I listened as my husband read stories to my youngest in her room and quietly praised myself for helping a child work through her despair with the kindness and empathy that I am starting to see reflected in her own behaviours more and more.

16 thoughts on “Making it Through Witching Hour… Without Losing It!”