Sibling relationships can be highly volatile but they can also be incredibly special. For many of us with multiple children, it is our dream that they will be best of mates, that they will care for one another, look out for one another and play happily together like all best friends do. The fact is, that at one point this was more than a dream for me, it was an expectation. 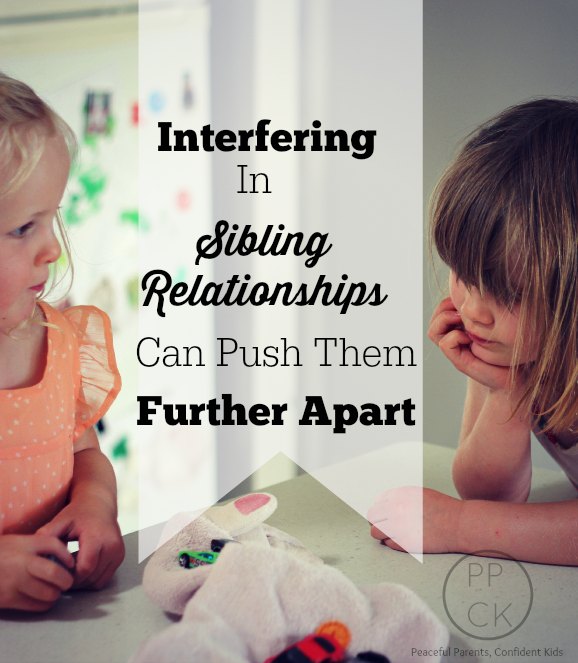 I was told countless times that due to the close age gap between my two children (13  months) they would become good little mates, keeping each other company and making my parenting role quite easy. Now, after two and a half years of having more than one child in our household, I know that the expectation I had is not only not helpful to me or them, it is actually detrimental to them forming a unique, authentic relationship with each other.

Don’t get me wrong, I still hold onto the dream but only time will truly tell. What I have realised, though is that the first step in my daughters forming a loving relationship is for me to butt out!

The whole way through my pregnancy I thought I was doing my eldest child, Lucy, a favour preparing her for her role as big sister with comments such as: “You’re going to be a great big sister when the baby is born!” etc. Then when the baby (Penny) arrived, I encouraged Lucy to show affection: “Give Penny a little kiss. Awww that’s lovely. You love your little sister, don’t you?”

Initially, Lucy happily obliged, after all she was only 13 months old and still quite amenable. I have many happy snaps of those first few blissful months when things here were actually peaceful and calm. I couldn’t wait for Penny to develop a little so that the two of them could play together and truly be great mates. I often used to make comments such as: “Penny is your best friend, isn’t she?” etc.

Then, much to my horror, only a few months in, my sweet little one year old started lashing out at her sister, being rough towards her, making her cry and taking her toys. She was beginning to realise that being a big sister wasn’t all it was cracked up to be. It was quite clear that they were now far from the best of mates but strangely enough I still carried forward this expectation that they should be.

Still unaware of respectful or peaceful parenting philosophies, I chose to use time outs and other punitive methods of punishment when Lucy was mistreating her sister. I was trying to force her into being her sister’s friend by giving her negative consequences when she dared think otherwise. I would follow it up with, “Penny is your little sister, you need to be nice to her.” or “That’s no way to treat your younger sister. She loves you and you’re hurting her. How would you like it if she did that to you?”

But it seemed that my appeal to her better judgement was falling on deaf ears. In that first year she simply amped up her quest to cause misery to her sister; screaming at her, seeking her out and using physical aggression towards her with no provocation. I hadn’t worked this out yet but Penny didn’t need to do anything to provoke Lucy, it was simply her existence that provoked her. It wasn’t the toy she had or the cup she was using or the area she was occupying, it was simply her!

My forcing Lucy to be kind and loving to Penny, this invader, was doing nothing to create a loving relationship between the two of them and everything towards destroying not only theirs but ours. Lucy needed someone to understand the hurt she was feeling, the loss she was suffering and support her by giving her the time and space she needed to accept that Penny was now a part of the family and would not be returning to the hospital.

By the time Lucy was 18 months old, the toy taking and physical aggression was peaking. It was at this time I discovered RIE (respectful) parenting and revised pretty much everything I was doing. Over the next year and a half, I took frequent opportunities to acknowledge how hard it is to be a big sister and to show Lucy I understood and wanted to help her. Perhaps the biggest change I made through was to simply stay out of it.

This did not mean I left them to battle on their own in the ring until a victor emerged. I did everything in my power to protect them both from physical altercations but was sure to remain neutral in my interactions with the girls. I sportscast their actions towards each other, putting it into words for them to digest and learn from.

I did not want Penny to feel victimised or disempowered by my constantly stepping in to save her. She did not need me to do this for her. She is a strong soul and even without words to verbalise her feelings, she is not only effectively learning to communicate her limits to Lucy, she is also demonstrating an acceptance of her sister’s hardship and unconditional forgiveness by seeking her out for play only minutes after an altercation.

Two and a half years on and after many moments of sitting on my hands and biting my tongue, my children now know each other implicitly. By giving them the space and tolerance to struggle with each other, they have a deeper understanding of one another than even we do and with their growing emotional intelligence, they now listen to each other with empathy and are fiercely protective of each other when the occasion calls for it.

They still regularly have altercations but through these they are learning conflict resolution, negotiation and empathy, so as much as I would dearly love for them to always be cooperative, considerate and to put themselves in the other’s shoes to avoid these struggles, I will continue to stay out of their sibling relationship. I will model these qualities for them to adopt when they are ready and they will continue to forge their special relationship, being nothing but authentic and honest with each other and hopefully, one day, they will look around and realise that their sister is the one person in the world that truly gets them.

Resolving a Toy Fight With One Simple Phrase

My parenting is inspired by the RIE approach. You can read more about this approach here. I also highly recommend the following books (affiliate links) 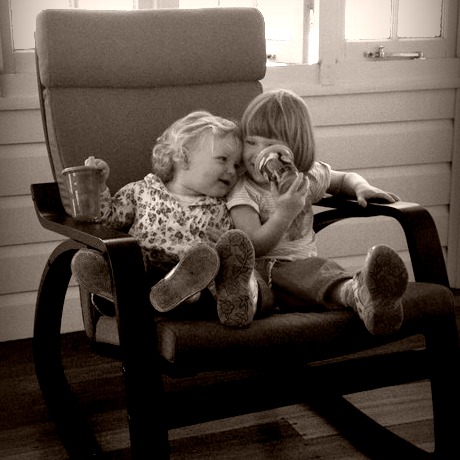