Ever since she could talk, my daughter has had something to say about the expectations placed upon her. Keen to stamp her independence firmly on every task or undertaking, L (3.5 years) has always ensured that if it involves her, she has a say in it.

Luckily for her, early on in her life we discovered the work of Magda Gerber and chose to adopt the respectful parenting practices that have guided new parents for decades, RIE. This practise has encouraged her freedom of expression and given her the opportunity to voice her opinion on matters big and small, whilst still being guided gently by her parents. 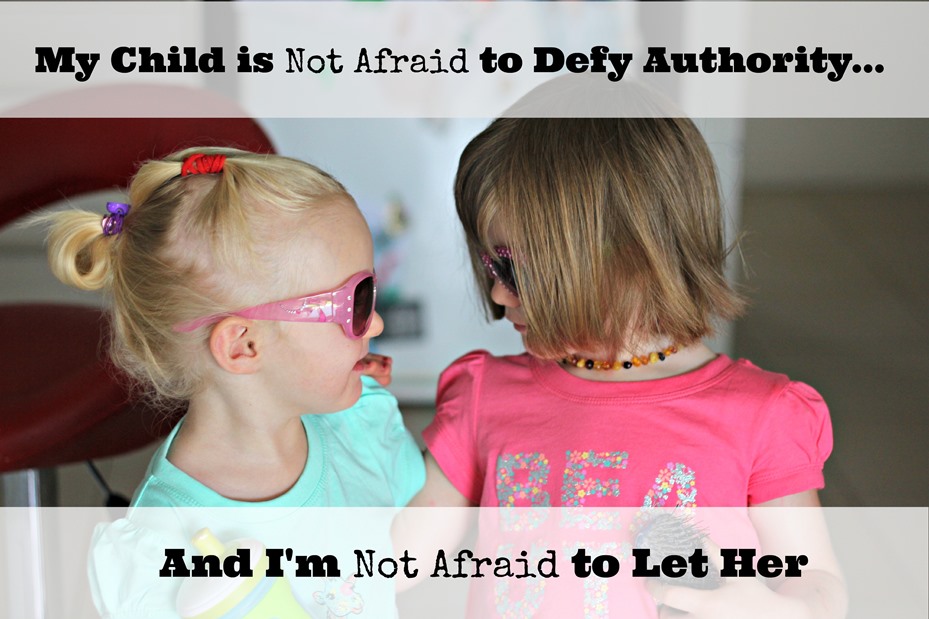 Empowering L to be her own unique person; someone confident to be herself, to know herself and to appreciate all that she is, is something we are striving for as her parents. For us to aim for complete and blind obedience would therefore be a juxtaposition. It would take a significant adjustment to her personality for her to suddenly give up questioning and obey our every command without thought.

She still needs limits, however. Without them, life here would be nothing less than chaotic. Setting limits comes fairly easily to us. Holding the limits, on the other hand, can be trying. L seeks to push the boundaries to the point of teetering before often needing help to move on from them.

Coping With a Limit Tester

This defiance and insistence on completing (or not completing) a particular task is something that has driven us to our wits end and back again. It is also something that has given us many opportunities to show our daughter that the communication lines between us are always open; that her opinion is important, even if it not always accepted.

A child not blindly following authority is not a cry for a stronger hand. She is already learning beautifully, the meaning of respect and appropriate behaviour and when and where she should use it. Coming down hard on her with punishments for questioning authority or misbehaviour can actually undermine this as she becomes confused about why the way she is treated differs to what she is being guided to do herself.

Her strong will and independence sees that she is not easily led by her peers either. She stands up for not only herself but her sister with confidence, steadfast in her beliefs and passions. I know that her willingness to question and take risks to support her own cause now, will see her able to make considered decisions as a teen and into her adulthood.

I was recently reminded of how important this concept is.

It was dinner time in our household; a highly-charged event with two young spirited children, exhausted from their refusal to day nap and quite particular over the likes and dislikes of their food.

On this particular night, the children were part way through their meal.

L, has a hard time sitting at the table to eat. We have a long-standing limit in place, which she knows and understands. If she leaves the table during meal time, she is indicating she is done with her meal and we put it away.

Having earlier left the table, she had already been reminded of this limit during the meal and had subsequently returned to her seat to resume eating. This reminder is normally all that is needed for L to remember that she needs to sit at the table to eat her dinner.

Thunder clapped overhead and within minutes, heavy rain was descending outside. I asked my husband if everything had been brought in, to which he responded that it had.

Suddenly, my youngest daughter, P (2.5 years), burst into tears. Her flower (one of many she had picked from the garden that day) was outside in the rain. Explaining the logical nature of a flower outside in the rain was fruitless to my distraught toddler.

My husband went out onto the patio with her and L followed closely behind. They searched in the dimming light but failed to locate it around the trampoline where P was indicating she had left it.

Inside, I was impatiently waiting for them to return to the table. The flower was lost. They were all breaking the limit.

My husband walked back in with an upset P but L would not come in. I asked her if she was done with her dinner because I was going to take her plate to the sink. “Just a minute!” came the reply from the dark.

I could just make out her little body climbing in through the now soaked trampoline netting and I felt a feeling of annoyance come over me as she defied my request and tested the meal time limit.

Just as I was about to remove her plate from the table, she entered the dining room clutching the small, water-logged flower in her hand. She rounded the table to her younger sister and gently handed it to her, soothing her tears with a: “Here it is!”

I felt a little shame before overwhelming feelings of pride swept over me as she gingerly climbed back into her seat. I set her plate back in front of her and smiled warmly, reaching out to touch her arm in a show of approval.

She had stood up for what she believed was right despite the risk of negative consequences to herself.

What would frequently be classed as defiance by many, to me was heroism. It was just a flower caught in a storm but that act took courage, it took guts and whilst I will always use limits and boundaries to keep my children feeling loved and secure, I am open to negotiation should there be a cause I may just be overlooking.