Just under a year ago, as I looked across the room at my then 2 and 3 year old girls staring numbly at the television screen, I began to contemplate what life would be like here without TV. 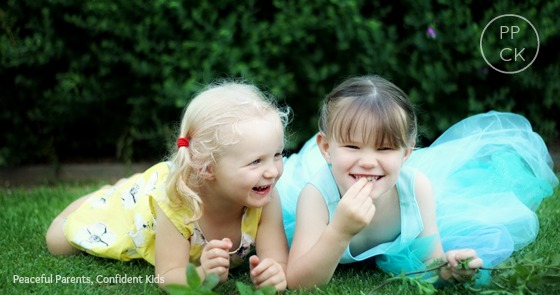 We didn’t use it all the time. I mean, it came on once a day, maybe, for 30 minutes to possibly an hour. The shows were always screened for suitability and it was usually something pretty tame like Playschool or Dora or Peppa Pig.

So really, it didn’t seem like too big a deal.

I loved being able to get things done around the house, uninterrupted. Secure in the knowledge that my children were being expertly babysat.

It hadn’t always been like that, we haven’t always been a huge TV watching family.When the girls were younger, they were not as easily drawn to the TV so it was not worth putting it on for them anyway.

But as they grew, so did their understanding of the shows, recognition of the characters and overall enthusiasm for this mind numbing device. And I say mind numbing in the literal sense. My children would transform from loud, energetic, shrieking avalanches of fun to drugged-up zombies in an instant. It was quite shocking now when I think about it.

As household and work pressures grew and the girls became increasingly resistant to brushing hair and teeth, getting dressed and many other daily tasks, the lure of the TV became too great for this Mama.

Over the weeks and months, TV became more and more involved in our family life. Even when the TV wasn’t on, the characters and the dramas dominated the girl’s play afterwards. Less and less were the girls satisfied with their own company and in their own play.

Increasingly, they would ask, no, demand, that I turn on the TV.

Keen to stay in control of this beast in our house, I set limits about when it could be watched and for how long but increasingly there were fights, tantrums and wailing if it did not live up to the girl’s expectations of when and what they thought they should be watching and for how long.

In the end, I had had enough. The TV had outgrown its welcome and it was time for it to fade into the background.

We had heard of other families doing weekly movie nights and I liked the idea of this. I thought it might also soften the transition away from the daily viewing the children had become accustomed to and give us some nice family time to look forward to each week.

But it meant that TV was only going to be turned on on Fridays.

Over the next few weeks, the children continually moaned for the TV to be turned on but we would consistently say that it was not Friday and that they could watch it when it was movie night.

I would be lying if I said this transition was easy.

It wasn’t. It meant that I no longer had a guaranteed number of minutes in a day to get my jobs done in peace and quiet. My uninterrupted ‘me time’ was now going to become a rarity for a while. It meant that when the children were driving me up the wall, it was up to me to find a new level of strength to keep motoring through with the poise and confidence my children needed from me.

I can tell you, that was hard but I did it – most of the time.

And here’s how you can too…

1. Arm yourself with knowledge

I strongly believe that to be successful in lasting the distance with the abandonment of  screen time, you have to believe in it and be completely convinced that it is the best thing for your children. You have to understand all the benefits of limiting screen time for children and keep these near to you to help you stay motivated when you are ready to cave. Here are some great articles to help keep you motivated on your journey.

How to Break Your Toddler’s TV habit ~ Janet Lansbury

Unplugged: Why we Quit All Screens ~ Kate Gribble

5 Great Reasons Not to Watch Too Much TV ~ Tsh Oxenreider

2. Arm yourself with support

It helps enormously to have someone who can support you along this journey. When my days were going pear-shaped and I was on the verge of picking up the remote control,  I would always ring my husband first.

I suddenly became more accountable when I did this. These were his children too and if I was going to make a decision about them, he needed to have a say. It was great to hear him coax me away from the remote, refocus me and give me a pep-talk to power through until his shift ended.

3. Arm yourself with organisation

I plan my days as best I can. Nothing fancy, just a simple schedule that breaks the day down into more manageable chunks. For me it takes the guess work out of the day. I have it all on paper so that when my mind loses focus and I am struggling through the afternoon slump, I have a guide coaching me through until the end of the day. 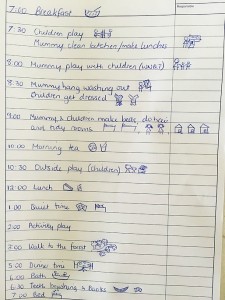 This is an example of a schedule I write out with my children in the morning. As you can see, Art is not my talent but the children insist on drawings so they can make sense of the schedule when I post it on the fridge.

Having it written out on paper also helps my girls cope with transitioning away from the TV. They sit with me as I plan it out in the morning and my spirited eldest daughter in particular has me go over it several times before she is able to recognise my (sub-standard) drawings and read through it on the fridge herself. We then consult it regularly throughout the day.

During quiet time, I do a quick house tidy up and then I might put out something interesting for the children to explore or set up and activity with paints or drawing implements for after quiet time. I then go to my children’s bedroom and spend some one-on-one quality time with them for about 15 mins each. This allows us to reconnect and fills their attention bucket, helping them get through to the end of the day with more independence.

The times are just a guide and of course there is room for flexibility, but having that plan keeps me strong and on top of things during some of the more trying hours.

4. Arm yourself with an alternative

Swapping regular, babysitting-type TV for a weekly family movie night has been the perfect deal. It is easier to let the children know when they are able to watch TV and have it set in stone so that we are not ambiguous and they know exactly what the limit is. We love our movies in together and although we have to watch ‘Frozen’ pretty much every week, we are finding that this is a beautiful time that we all look forward to as we wind down at the end of the working week.

Giving up our TV habit was not the easiest task. It takes strength and commitment to show our children that they do not NEED to watch it. Arming yourself with some simple strategies can definitely make the screen free transition less harrowing.

Now that I see how much more playful, creative and engaged my children are becoming, I am relieved that we bit the bullet and made that shift when we did. It has been one hundred percent worth it. 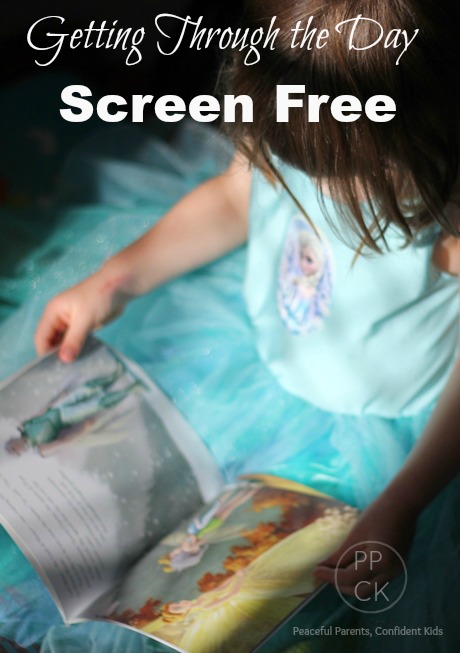 12 thoughts on “Getting Through the Day Screen Free”