You know that feeling you get when you are on a theme park ride that suddenly drops? Your stomach leaps out of your body and you have to catch your breath. You get the same feeling when your car drives over a crest at speed. It feels like an ampule of adrenaline has been injected into your bloodstream as you take a moment to settle yourself.

Now imagine that you are brand new to this huge, open world; all you have known previously is a confined cavity. You have been unable to travel through air, as your surroundings came everywhere with you. You have felt cushioned bumps, jumps and ups and downs but it has all been experienced within the surety of the womb in which you have been enclosed.

And now you are out. Now your senses are bombarded with bright lights, loud noises and motion through space. It takes a while for your still-focusing eyes to adjust to all the stimuli you see and your vestibular system, the one that helps you find balance, is still trying to make sense of all the movement you are now experiencing. Life has suddenly gotten a whole lot faster and it can be stressful trying to keep up. 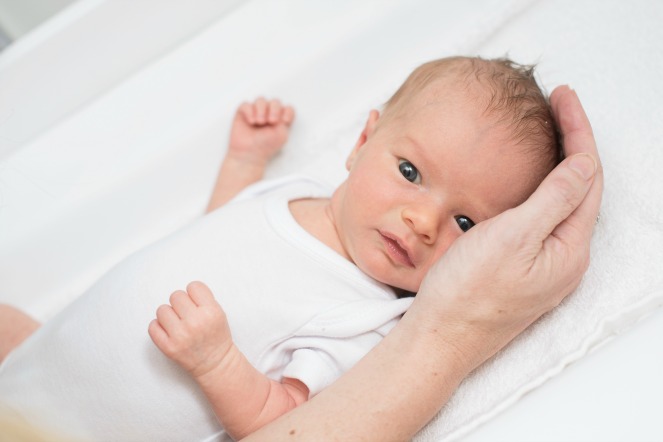 You are picked up from your bassinet by your loving parent and it feels like you have just taken a ride up the ‘Tower of Terror’ at Dreamworld.

You imagine you are completing a lap of the Monaco Grand Prix as furniture, fittings, doorways, picture frames and cornices go racing by as you are carried through to the living room at the other end of the house, in your parent’s strong arms.

Then, you are being lowered to the floor. Your arms fling out to the side as you try desperately to stop yourself falling; your stomach hits the roof of your mouth and you feel like you have just dropped backwards out of a plane at 14000ft.

Finally, your back hits the ground. You allow yourself to relax into the still firmness of the floor beneath you. You start to look around, curious about these unfamiliar surroundings, only to have a noisy toy rattled right over your face.

Overwhelmed would likely be an understatement in explaining how you might now feel. Confused, over-stimulated, insecure and unsure could all be used to describe your thoughts after this fairly typical experience in your day.

Babies take in and adjust to so much in those early days and months. Although competent by nature, it is very easy to undermine a baby’s sense of confidence by exposing them to too much, moving too fast and failing to think about the view of the world from their perspective.

Through my studies of Magda Gerber’s approach to raising children, I was lucky enough to have an awareness of this when my daughter was born. I was able to view her as whole and complete from birth. A new human, sure, but with a unique individuality and a perspective all of her own.

I made a concerted effort to keep her early months slow and under-stimulating and to see things through her eyes. I took cues from her, and realised that her understated surroundings in her nursery was exciting enough for her curiosity and senses in those early days.

Rarely did she leave that space as she gently transitioned between sleeps, feeds and changes, becoming comfortable with her familiar, cosy environment. Our days were unhurried and under- scheduled to allow her time to adjust peacefully to a sometimes hectic and chaotic world.

One thing that became really obvious to me, was just how sensitive her tiny body was to quick movements. I had to slow everything right down. I picked her up as though I were picking up a dish filled to the brim with hot liquid I dare not spill. I put her down the same way, holding her head for an extra moment or two before letting it go.

I could see that when I rushed these simple, yet frequent, actions, her body would show tension. A look would come across her face, her arms would flail out and her body would brace itself for the unknown.

In contrast, when I lifted and lowered her with reverence, she was freed of stress. Keeping my body close to hers, supporting her securely and moving her at snail’s pace, she was able to trust and feel comfortable during such transitions. Her eyes could lock on mine and we could connect over this seemingly innocuous experience.

I was lucky enough to hear Elsa Chahin, President of Pikler/ Loczy USA speak at a workshop earlier in the year. She talked about renowned paediatrician and founder of the Loczy Instiute in Hungary, Dr Emmi Pikler’s, idea of moving with and around infants in ceremonious slowness. She likened it to a bride taking her sweet time to walk up the aisle to soak up the limelight and enjoy the experience for as long as possible.

When my daughter became a little older and was waking for longer periods of play in the day, I often had that image in my head as I carried her from her room to her play area. I would observe her during those transitions, taking time to see and acknowledge the things that caught her eye as we travelled slowly past them.

In the times I was rushed (of course there were many times I was unable to be as mindful as I would have liked), I would see her trying to crane her neck to focus on something, but moving by too quickly, her head would fall back and start all over again, focusing on the next thing that caught her eye.

By the time I got to her play space to put her down, she would seem much more clingy and unsure than the times I moved with that ceremonious slowness. Often, I would need to stay with her whilst she settled herself before I could confidently leave her to play.

At the workshop, Elsa asked half of the group to lie on our backs on the floor, as babies do, and the other half were to walk quickly around the room, moving past or over the ‘babies’ in a rush. As I lay on the floor, I honestly had to close my eyes and hope the assault on my senses would soon be over. It was horrific.

The floor pounded through my head like someone had taken a set of congo drums and planted them between my ears. As giant bodies stepped over and around me, I found myself flinching, untrusting of the feet that seemed to come precariously close to me.

Suddenly the signal was given for the ‘carers’ to walk softly and slowly on the balls of their feet. The relief was immediate and allowed me to relax into my position on the floor and begin to take in my surroundings without fear of what might happen to me. Without the pounding, I could concentrate and felt much more capable of enjoying my time lying there.

It was an eye-opening experience and gave me a profound understanding of truly seeing the world though a baby’s eyes.

10 months in and I am still very mindful of the importance of slowing down in my daughter’s presence. Some people have questioned whether treating my daughter with such ‘preciousness’ is setting her up to be timid and hyper-sensitive in the ‘real world’. I have been able to assure them that, on the contrary, the feelings of security my daughter has enjoyed in being respected in this way has given her a greater sense of trust and confidence in herself and others.

She is content to play independently of me whilst I work in an adjoining room for upwards of an hour. Her secure attachment to me and the respect she has felt from birth means that she is free from the burden of wondering if she is loved, if she has worth, who cares about her etc. This allows her to do her own work and challenge herself in so many ways whilst she plays in her safe, gated area in the lounge room.

Photo credit: The Heart of Motherhood

4 thoughts on “Why Babies Need us to Slow Down”