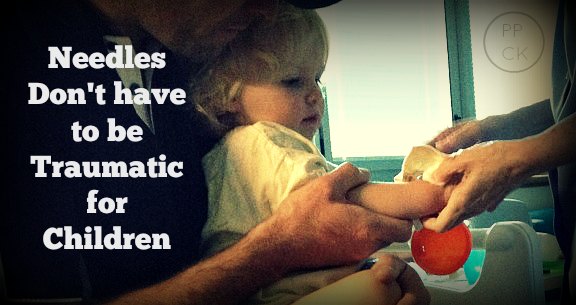 The doctors performing this procedure were used to lethargic, sick babies who were either asleep or too weak to fight.

Immediately following the insertion of the cannula they had to perform a lumbar puncture. Once again, Penny screamed as they held her tightly while the doctor carefully inserted a needle into her spine and withdrew the spinal fluid they needed. Traumatic would not even come close to describing this procedure for both Penny and myself.

Finally, after an ultrasound on her head and an MRI, she was hospitalised whilst doctors and specialists looked for answers to explain her condition. Eventually, when all tests drew blanks, she was transferred to a bigger hospital where she once again had to go through the trauma of having a cannula inserted and being poked and prodded by every doctor from differing departments who all seemed to want to see this baby with the mysterious condition.

Throughout this period, I was unfamiliar with the philosophies of Magda Gerber and RIE (respectful parenting) and whilst I remained with Penny throughout the whole ordeal, I let everything happen to her without a single word. I did not think to warn her when things were about to happen to her and was often so emotional myself that I forgot to acknowledge how she must have felt to have had these things done to her. I know now that this would have amplified an already extremely traumatic time for her.

Nothing in the way of tumours or brain abnormalities were found to be causing the paralysis and as Penny was displaying good vital signs, she was discharged and brought home after 4 days with a diagnosis of Bell’s Palsy.

I immediately noted a change in Penny’s demeanour. She was tense, anxious even, and had a hard time being separated from me for any length of time. Over the next 6 months, Penny gradually began to relax and let some of her anxieties go, especially after I took her to a paediatric chiropractor.

However, whenever I took her to the doctors for her immunisations, she would still get so worked up just being in a doctor’s presence and well before even having her needles. It was clear to me that she had held on to some of the trauma from her time in hospital.

Had I known more about the respectful parenting philosophies inherent in RIE parenting I would not only have changed the way I approached Penny’s time in hospital but I would have also changed three things about taking both my girls for immunisations, which have always previously been a stressful experience in our family.

1. Stop letting my own fears show

I have my own hang ups about having needles as I would always faint when given vaccinations when I was younger. Because of this, I would always look away from the needles my children were given and grimace my face if I saw them being prepared. This would have only served to reinforce the girls’ fear of being injected.

2. Stop letting the needles be administered without warning

I would always let the needle be given to the girls without warning them it was about to happen. I hadn’t realised that with the appropriate verbal and visual cues, I could convey to them a rough idea of what it would feel like, giving them some time to both mentally and physically prepare for the needle.

I was always guided by the nurses’ suggestion to distract the girls away from the needle so they could do it quickly and then I could comfort them afterwards. By using a toy or keys etc, they would be happily engaged in something else and then be totally shocked when the pain of the needle hit. I was never sure whether the screams that continued for a long time after was the result of the pain or the shock or the mistrust that this must have created of me.

So, after her 6 month needles, Penny did not need any more immunisations until she turned one. Well, Penny turned one last week and this week she was booked in for her one year old needles.

Some time between her 6 month and 12 month needles I read a post from another mother outlining how she enjoyed visits to the doctors with her children, even when needles were involved (I’m sorry but I can’t seem to find this post to link to it). It seemed amazing to me and even a little sadistic that anyone could enjoy taking their children for needles. But I read with fascination and I vowed to rethink the way I approached immunisations with my girls.

So when the day came to take Penny to get her needles this week, I began by letting her know what we were doing that day. I told her that I would be taking her to the doctors to get her needles. And I explained that she had to have them to protect her from getting very sick. I let her know that they would hurt a bit and it was ok if she needed to cry. I would be there to give her a cuddle.

I repeated this mantra when we got in the car to go, and again as we were walking across the car park and also when we were sitting in the waiting room, waiting to see the doctor.

I should let you know that I made sure I had organised someone to watch my elder daughter so I could give my full attention to Penny at this time.

After she was weighed and measured by the nurses (which I was careful to talk her through as well), I held her on my lap whilst they prepared the three needles she was to have – one in her arm and one in each leg.

I told her what was about to happen and at the same time I would take my finger and gently press it into the areas that would be injected. She looked on in fascination each time I poked her.

The nurse came over with the first needle to go in her arm. I said “Penny, the needle is going to go in right here and will hurt a little. As I said this I used my nail on my finger to gently make a little scratch where the needle was about to go and reminded her it was ok to cry.

The nurse gave her what I thought looked like the biggest needle I had seen in my life and both Penny and I watched as it went in. I am pleased to report that not only did I not faint – haha, but Penny did not even so much as whimper for the whole of the first needle. The nurse could not believe it!

She then had to have the next needle in her leg. I did the same thing. I spoke to her and gave her a little scratch where the needle was about to go in telling her. “The needle’s going in again, right here this time. It may hurt a little but I’m right here if you need me.”

She watched it intently again and this time she did a small whingey cry for about 5 seconds after the needle came out. I acknowledged that it must have hurt her a little and let her know that she just had one more to go.

The process was repeated for the last leg and again she gave a small cry for 5 seconds before turning around and giving me a little cuddle. She almost immediately wriggled off me to go and play with something she’d spotted, even pausing to give the nurse a cheeky smile.

I honestly felt like crying! I was so proud of her and myself. We had turned an extremely traumatic event into a special time for connection and bonding. The nurse couldn’t stop exclaiming how she couldn’t believe that after three needles she wasn’t screaming the surgery down. I am positive that had I continued with using distraction, and not involving Penny in the process, she would have done exactly that!! 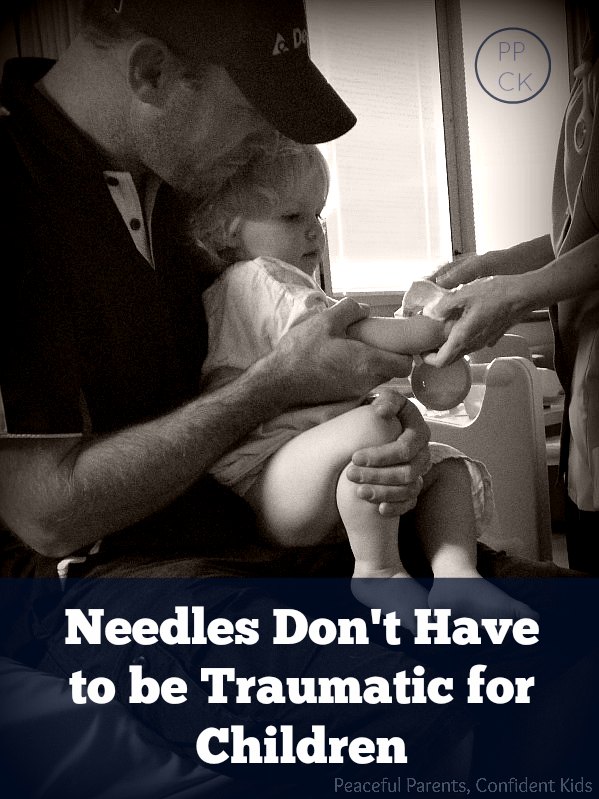