Meal times with toddlers can be stressful. For parents, there is the constant pressure to ensure children are receiving adequate nutrition, which, combined with a toddler’s need to assert their autonomy can lead to anything but a peaceful toddler meal time. 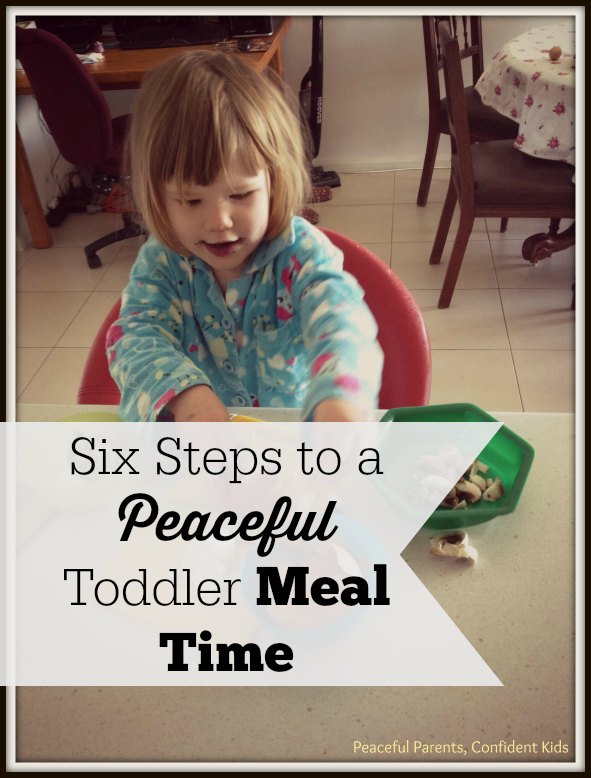 It is no surprise, therefore, that at some stage, our babies or toddlers sense our stress and may change their eating behaviours in response.

This happened for us when our daughter, hit around 9 months of age (although, we certainly didn’t realise it at the time). She was a pretty good eater but was never a big eater.

I occasionally worried that she wasn’t getting enough food but generally she ate happily and without fuss.

This all changed, however; overnight. Mealtimes became more akin to a battle field and those in charge of feeding her needed to ensure they were ‘suited up’ in appropriate apron-ware to repel the projectiles of food that soon flew through the air either by hand or straight out of her mouth!

It became a very stressful time for all involved. It was only thanks to hindsight and an article highlighting changes that can happen with babies and their food, that I could see what may have happened to cause this shift in behaviour. And I have since set about making meal times peaceful once more using six helpful strategies.

At around the time food became an issue, our daughter had developed her first gastro bug. It was not overly serious but she had a night of vomiting followed by about two weeks of diarrhoea. Not being aware of the RIE approach to mealtimes, I had always used distractions such as toys or keys or other objects to keep her attention whilst I spooned in as much as I could.

At around the time she was sick, she went off her food almost altogether for a period of time. Concerned that she was not eating enough, I tried everything to get her to eat her meals. I coerced her into taking, “Just one more mouthful.” with pleas: “Come on darling, you like spaghetti.” and bribes: “If you eat this pea, you can have some apple puree.”

It became a battle of wills fraught with emotions from us both. In her advice to another parent having the same issues with their toddler, Janet Lansbury had this to say, which helped me to see what might have been happening at our dinner table.

“Then something happened. Your guess is as good – or better – than mine: teething, a cold, a change of taste, or just a period of growth when Tessa didn’t have her usual appetite (children go through phases when they eat less). This change in Tessa’s eating caused her parents a teensy weensy bit of concern, her antenna picked up a “vibe” (with a toddler’s sixth sense, it doesn’t take much), and she felt some tension surrounding her and food.

Eating is an area Tessa controls and needs to control. She is the only one who knows when she’s hungry and when she’s full. She has to listen to her tummy and trust herself. Lately, mealtime has become a little too “loaded” for her to be able to listen.  She’s not trying to torture you; she’s just feeling her power and playing her role, which is to resist anything she perceives as pressure”.

Having read this and the useful advice which came along with it, I set about turning mealtimes into a stress free activity once again using these 6 steps.

1. Taking the emotion out of the food

By celebrating when our daughter would eat a mouthful or by pleading with her to eat her food, she was learning to associate her food with power. She knew she could control the situation to get reactions out of me. Meal times was not about eating to satisfy hunger anymore but rather, a game, a time to test boundaries.

We needed to stop using ‘tricks’ to get her to eat. When mealtimes are on now, toys and other distractions are put away so the focus is on the food. She gets to control what goes in her mouth and is a full and active participant in the process rather than merely a recipient of food.

We trust her to know what her body needs and remain unruffled by her choice not to eat much or any of the food offered. By removing the emotion and simply presenting her with the food, our daughter has now learned that when she eats it is about filling her tummy, rather than a game or a power struggle.

By setting a logical limit of removing her food once our daughter began throwing, spitting or playing with her food, we were able to respectfully restore the peace to the dinner table. As with many toddler behaviours, there needs to be guidance and boundaries that help them learn what is and isn’t acceptable. This doesn’t need to be heavy handed or a power struggle but it does need to be consistent.

In particular, we are careful with the language we use when she starts to play with her food. If we see her playing, we state very matter of factly: “I can see you are playing with your food. When you play, you are telling me you have finished eating. Are you done?” She then has the choice to continue eating her food or have me clear her plate. If the playing starts again, we remove the plate simply saying “Thank you for letting me know you have finished. Here’s a washer to wipe your hands.”

Using this, we now rarely have an issue with playing with food. She will still occasionally test this limit but by staying calm and consistent in how we approach it, it never escalates to tantrums by her or anger by us.

This is a great piece of advice. By giving her a small amount on the plate, it makes it seem less daunting for her to eat. If she finishes what’s there, we always have more ready to refill her plate. Often now, we will put just one small piece of the vegetables that we know she does not like eg one pea, one little cube of sweet potato. Some nights she leaves them, others she puts them in her mouth and bites down before spitting them out again and every so often will actually eat it. We love that she still has the opportunity to try these things and we know that one day her tastes will mature and she will happily eat her vegetables.

4. Including a variety on the plate

I know myself that if I eat a plate of the same thing, I fill up pretty quickly, but then can find room for some garlic bread or dessert or something with a different taste. I figure it is the same for my kids. We always try to provide a variety of tastes and textures so that when she gets sick of one thing, she can try something different.

5. Not trying to eat with young children

In her book ‘Dear Parents – Caring for Infants With Respect’, Magda Gerber suggests having dedicated meal times for young children with adults eating separately later. I had always thought that eating a meal as a family was important and that the children would see us eating our food and try to emulate.

The reality was always far from this, however.  It seemed that the children picked up on the small moments of inattentiveness when we would go to take a mouthful and choose those times to upend the plate or knock the cup of water on the floor. It was never the picture book moments I had envisaged where we each discussed our day’s events.

Meals are one of those caregiving times where being 100% present with the child is necessary for them to be happy in their independent play later. Trying to eat and be present, is very difficult. Usually the meals go cold all round!

When the children are older and more independent, we will be happy to transition to a full family meal time.

This was a big one for us. Snacks were used regularly in our household as a distraction to ‘buy time’ when I just needed to get the last of the washing on the line or get the bags packed for an outing or in the car to keep the kids happy and quiet.

Since discovering a much more purposeful and respectful approach to parenting under the RIE philosophies, I now find I don’t need to use snacks in this way and as a pleasant side effect, I have noticed that the children eat much more heartily at meal times. Not having snacks at the ready throughout the day also helps to reinforce to her the importance of eating the food presented to her at meal times.

Overall, meal times are now a much more pleasant occurrence in our household. Both our daughters enjoy having us present with them when they eat and power struggles are now few and far between.

12 thoughts on “Six Steps to a Peaceful Toddler Meal Time”