Rage is something many of us have experienced on more than one occasion. It is more than just anger, it normally comes from a feeling of gross injustice; a feeling that boils our blood and we literally feeling like inflicting pain on someone or something in order to satisfy that raw emotion that threatens to undermine our normally level-headed composure.

Children experience the same sense of rage that adults do. In fact, their emotional and social immaturity makes them even more susceptible to experiencing this strong emotion as they lose reasoning and logic in their interactions with others. They come from a self-centred view point and therefore genuinely feel great injustices on an almost daily basis. 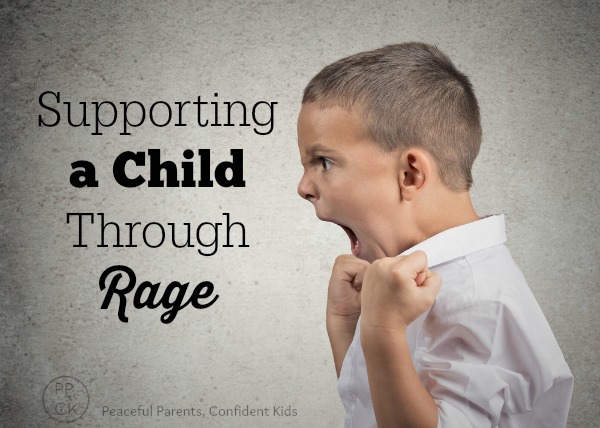 Thankfully, as adults, most of us have developed enough emotional regulation to stop ourselves from fully expressing our rage. We might complain, yell or scream but most of us pull up short of causing physical or emotional destruction to those around us. Over time, we have developed strategies for managing impulses which include taking deep breaths, walking away, making other physical efforts to release steam etc.

Our children are still developing this level of control and so, when they rage, more than anything, they need us to love them and support them through the intense hurt they are feeling.

Like adults, there are a huge range of differences in the way children react to rage. Some children scream and flail in their parent’s proximity, others take themselves to their bedroom, slamming the door and vocalising their disgust to noone in particular and others take a more physical approach which can include screaming and shouting whilst hitting, kicking, pinching, scratching, throwing objects and generally causing destruction to those around them.

As a parent of a child who engages in physically destructive behaviours when she rages, I have considerable experience with managing it – some good and some not so much.

It is hard, possibly one of the hardest things both physically and mentally I have had to deal with as a parent in recent years. But I acknowledge that my hard and her hard are not comparable. Understanding how SHE must feel in those moments of being completely out of control, feeling that level of pain and anger, has made me reevaluate how I am helping her through these moments.

I had thought, staying calm and level-headed whilst she rages (most of the time) was enough to give her the space she needed to work through her emotion. I had also confidently (read: sternly) let her know that it was not okay to hit/ hurt etc and I had helped both her and me achieve success with this by putting a door between us and staying close by until she calmed herself.

Recently, however, these raging moments have been more frequent and more escalating as she has had to deal with some significant changes in her life. It has forced me to really think about the impact of my interaction with her during these hard times and made me realise that simply giving her time to work through it falls short of what she needs.

RIE Associate, Janet Lansbury has always taught me to show understanding and acceptance of my daughter through all her behaviours and I was finding it increasingly difficult to demonstrate that I accepted her whilst managing these strong behaviours.

How to Calm an Angry Child

She would lash out at me with hits, kicks, scratches and bites and I would let her know that I would not let her hurt me and then take her to her room where she could be safe to rage away from others in the family. I would endeavour to stay with her in her room to show support but would usually end up leaving when I could either feel my calmness waning or when she had screamed at me enough that she wanted me to leave that I believed she meant it.

I would walk out of her room and close the door, letting her know I needed to keep myself and her safe and that I would wait right outside until she had calmed a little.

The thing was, though, when I put the door between us, I was essentially saying “I can’t handle you. You are too hard for me, so you’re on your own with this pain.” More than that, I was sending her the message that there must be something wrong with her; there must be something that needs to be fixed. How hard would this have been for her to hear when her reactions to her burning rage were out of her control.

Janet recently helped me understand that when she comes at me in the initial rage, I need to block her hits calmly but be careful not to overdo this. I was too focused on making her stop hitting (for good) that I was holding her too firmly and speaking to her too sternly.  Janet explained that it is better to look her in the eyes and nod in understanding whilst gently deflecting her blocks.

I tried this; I began to see my hands as hands of love not defense. Each interception I had with her was to show her how much I loved her and accepted her hard time; accepted HER. I gentled my voice. My words and tone spoke to her with kindness, not just discipline.

She knows hitting hurts, she can not control this rage yet, so it is important for her that I go with her on her journey with love not contempt.

When she screams at me to leave, I believe, now, that it is better for her that I stay. I know that she needs me to stay because despite her convincing requests that I leave her alone, she always follows me with her rage as I make my way to another part of the house. She wants me to hear all her anger and to reflect my love and acceptance back at her.

I also acknowledge that I am stronger than her. I am capable of physically blocking or gently holding her without getting injured. Yes, I sometimes miss a hit but I am stronger and the pain is mild and short lasting in the grand scheme of things. I am not a victim though, and I will not play that parenting role. It would be equally damaging to my daughter for her to feel that type of power over me.

It is important that I can show her that I won’t let her hurt me, however, I don’t need to put a door between us and I will only resort to that if for some reason I do not have the physical or mental capacity to do otherwise. So far, I have not had to do this since making these slight adjustments to how I deal with her rage in the initial instance.

The other night, my daughter was enraged because her dinner had been removed after she had indicated she was done by leaving the table (this is a long-standing limit and she had been given a reminder). As she fought to access her plate I was able to soften myself and present her with nothing but love and understanding.

I acknowledged her upset and nodded my head at her anger. I gently blocked her hits with hands of love and did my best to keep eye-contact. The rage dissipated within minutes. Her lashings became less convincing and she eventually crumbled in a heap on the floor. There was no need to tell her I wouldn’t let her hit me or that hitting hurt. It was about her and her pain in that moment.

There were a couple of swipes in this altercation that scraped my arms a little but because of the love that flooded me and reflected to her, the pain did not trigger me or even really register.

Since that time, there have been several other similar outbursts but each one has ended much more quickly than previous incidences and brought us many moments of connection as we work together to get through this phase. I can see in recent weeks, my daughter’s need to express herself in this way dissipating and I am grateful that I have been able to show her my love through her pain.

Once again, I am realising how important it is that we show our children the kind of love and acceptance we ourselves crave. When we can do this and let go of our own hang ups about these triggering behaviours, we set our children up for a life of self-acceptance and eternal confidence.

13 thoughts on “Supporting a Child Through Rage”