As an infant, my daughter could have been considered a very confident baby. Not a lot phased her, she rarely objected to strangers holding her and in play group settings, was very interactive with other babies and seemed happy to explore her environment with plenty of confidence to try new things. She has always displayed exceptional intelligence and physical ability and has a beautiful heart, but somewhere along the way, my little girl’s confidence has been knocked. 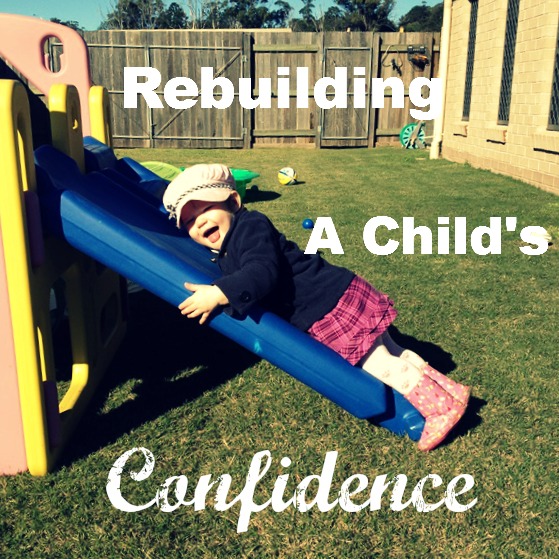 No longer is she always such a happy, carefree girl, and although this shift in confidence has been gradual and is peaking just as she approaches the age of two (a tough developmental stage), I can’t help but think that maybe there were some areas of my parenting that in some way contributed to my daughter’s change of nature.

I have decided to break it up into the four areas which I think may not have been ideal for supporting the confidence she was innately born with:

1. Putting her into situations she was not ready for: 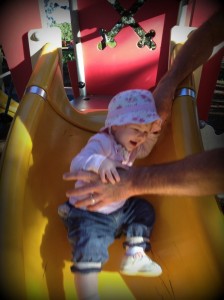 I used to have so much fun taking my daughterto the park when she was just a small baby. She seemed to love being pushed in the swing and being slid down the slippery slide. I would also help her climb up large structures by supporting and boosting her up. Unfortunately, I didn’t realise that by putting her into situations that she could not get into herself, I was unwittingly conveying the message that her actual abilities were not good enough.

Then, it was a little like a perpetual roundabout that was difficult to get off. The more we did this, the more she wanted to do it and the more she would become frustrated when she couldn’t.

In a previous post, I spoke about my natural desire to want to see my child achieve her milestones. I would try to aide her rolling by helping her onto her tummy or back when she was clearly trying to do this herself but not quite making it. I believe this may have kick started her ‘frustration squeal’ as she learned to depend on me to get herself into positions she didn’t have the muscular control to do herself and in doing so made her question the confidence she had in her own ability to do things, as well as making her feel she was inadequate because she couldn’t do it.

The same happened when she was thinking about crawling. On hands and knees, I would gently guide her hand forward, followed by her knee to show her the motions. It wasn’t long before she realised that she couldn’t crawl by herself when she wanted to and so the screams continued.

Then came the walking and so on. To her, it seemed that what she was capable of doing in the here and now was never good enough and my pushing her into things she wasn’t ready for was only fuelling this thought.

2. Playing too well with her:

When she was younger, I loved playing with her. It was like I was reliving my own childhood. I loved to build her towers that she could knock down and then help her to build her own.

When we played with play dough, I would be right beside her playing too. I would make lovely shapes and figures and tell stories with them whilst my daughter looked on with her big ball of mushed play dough.

When she would colour with her pencils, I would enjoy colouring in myself, being sure to stay neatly inside the lines. Little did I realise that  by engaging with her play in this way I was undermining her confidence. She would see what I was doing and when she realised she could not do it as well as I could, she would give up.

In hindsight, she communicated this to me well before she could speak. If she was building blocks beside me and was having trouble stacking more than three blocks, whilst I was easily building a great tower she would aggressively knock both hers and mine over with a yell of frustration and move onto something else.

Her reaction with the playdough was very similar and when we would colour, if she stopped to look up at mine, she would see how neat it was and then quickly scribble over the top of it and tear her own page or throw her book on the ground. She knew there was no way she could complete the tasks to the standard she thought she had to, so she would vent her frustration and then destroy my creations, maybe trying to tell me I was expecting too much.

I was teaching her how to do things properly but I hadn’t realised that, in a child’s eyes, there is no such thing as properly until you show them there is.

3. Helping too much when frustrations set in:

It is so instinctive to want to jump to the rescue of a child who is crying out for help. It is an easy fix. You solve whatever problem is ailing them and then they’re happy, you’re happy because they’re happy and everyone can go on happily playing. Problem is, when you do this, you are giving them the message that they can’t do it on their own. Therefore, when the same or a similar situation arises, the child will continue to cry out for help, lacking their own confidence to work it out for themselves.

When I think about it, I helped my daughter from early on by handing her the toy she was searching for, just out of her reach. As she grew older I helped her with puzzles, shape sorters and other toys that required problem solving. I would unhook her pram when it got stuck on something as she pushed it in an effort to prevent her shouts of frustrations and turn her posting cards around the right way for her so she could post them into the box easily.

I thought I was helping her through her struggles; I was showing her how to do things so she would quickly learn and not have to struggle anymore. Problem was, she wasn’t given the opportunity to work things out for herself and by helping her through her frustrations, I  was conveying a message that she was incapable of doing it on her own.

4. Providing her with too many electronic toys: 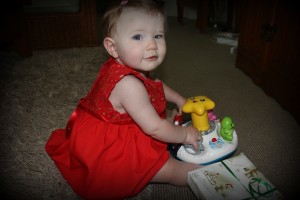 Complex in their design but simple in their operation, electronic toys gave my daughter a false sense of her ability. With many of her electronic toys, she could simply press a button or pull a handle and something amazing would happen. It was so easy for her that when given an inert toy that did not have a button to push or lever to pull, she had unrealistic expectations of what should happen with these toys. When she could not get something to perform for her easily, she would give up and question her ability to work it. She had little perseverance for problem solving type toys. preferring the cheap entertainment of the flashy toys.

Where to From Now?

Following RIE philosophies, I am now in the process of re-building my daughter’s confidence. As I undertake this task, I am mindful that this is not a quick fix and will take a great deal of dedication, patience and reassurance.

I now refrain from my own desires to play with my child and when I do, I am always careful to allow her to guide the play and tell me what to do, rather than the other way around. Electronic toys are a thing of the past and she is now able to engage in skill building, problem solving and open ended toys for longer periods of time.

If she cannot climb it, jump it, get into it or on it then she doesn’t get any assistance from me other than gentle support with comments like: “I can see you’re trying really hard. It’s difficult to climb over that climbing frame. If you’d like to keep trying I will stay right beside you for support.”

By substituting the old methods for these new ones, I am slowly starting to see a return in the spirit of my little girl and I hope she will go on to climb mountains, full of confidence that she can achieve anything she sets her mind to in life.

Could Young Children be Better Served by Not Teaching Them ~ Kate Russell (Peaceful Parents, Confident Kids)

23 thoughts on “Rebuilding a Child’s Confidence”