If someone told you that they had a magic cure that would end all sibling rivalry for good, I’m sure you would pay good money to be let in on that secret. Living with siblings who squabble, bicker, fight, torment and harass each other regularly throughout the day can be incredibly draining.

Unfortunately, this magic cure does not exist but there is a sure fire way to reduce the mental fatigue associated with fighting children. This strategy not only empowers children to learn from their arguments but also provides them with the opportunity to develop the skills that will enable them to negotiate through squabbles, themselves. 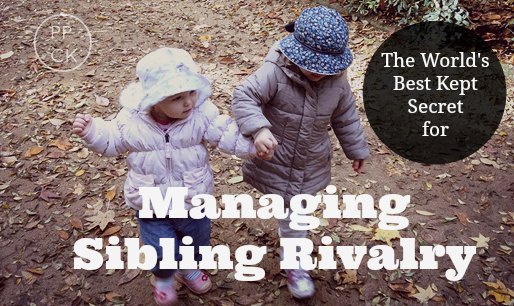 When I first heard of the idea of sportscasting, a term coined by RIE founder, Magda Gerber many years ago, I was intrigued. I wondered if coping with sibling rivalry could really be as simple as talking children through their actions, much like a narrator would do when describing a scene or actions of characters in a scene.

My mentor, Janet Lansbury (RIE associate and parent educator) explained to me:

“The difference with the RIE approach to squabbles is that we don’t dictate, suggest, teach or enforce “turns”. We really do trust the children to figure these things out for themselves (at your children’s age, especially). We would totally be there to prevent hitting, pushing, pinching, biting, but would be fine with a child pulling something out of another child’s hands…”

I decided to put it to the test and found that not only did the children respond astoundingly well, but as a parent I finally felt like I had the exact tool I needed to cope with sibling struggles without losing my mind.

I was freed of the burden I had felt when I thought my role was to solve their arguments for them and bring them to an abrupt stop. I was also empowered with the right words to say in these moments, reducing confusion and frustration on my part and bringing more consistency to my parenting.

Over time I have practised and refined my sportscasting technique following Janet’s advice.

My early sportscasting attempts projected too much of my own perceptions and bias onto the girls’ struggles. I still wanted to help bring about a conclusion as quickly as possible and this only served to heighten the sibling rivalry.

Janet pointed out that it is vital I remain neutral during altercations. There are no victims or perpetrators only two children behaving in a developmentally appropriate way and needing some support to help guide them through.

For example I might have errantly said to describe a toy snatching scenario: “P, you had the giraffe and L took it from you. L, P’s crying because you took her giraffe. It’s not nice to take things from other people.”

By saying ‘L took it’ it implies a victim and a perpetrator. L therefore feels I am taking sides hence, increasing her jealousy towards her sister. By adding ‘It’s not nice to take things from people’ I am inducing guilt and making L feel bad about herself thereby weakening her relationship with me.

Instead I could simply say: “P, you had the giraffe, now L has it.” If she is upset I could add: “You seem upset. You were still using it.” And that’s it!

We have been successfully sportscasting the children’s squabbles for three years now and have seen a dramatic increase in the number of altercations they are able to work through themselves. The following examples step you through the process of sportscasting for a number of different scenarios. They aim to provide you with the wording and actions you could take to help your little ones through their squabbles.

Remember, the key is, don’t ever take sides, even if it seems glaringly obvious to you that an injustice has been done.

I was washing up the breakfast dishes whilst the girls were playing in the play room. I heard both girls start screaming so I downed dish brush and headed in to see what was happening. When I got in there P (2 yo) was in our low hammock swing and L (3 yo) was climbing in on top of her. This is what transpired:

Me: “I didn’t see what happened here but you both seem upset. It looks like you both want the swing.” [Pause]

[To P] “P, you haven’t finished swinging yet. You look like you are getting squashed under L. L, I’m going to help you hop off P.” [When there is risk of injury in squabbles, it is important to step in to keep all parties safe]

L then started happily pushing P on the swing for about 30 seconds before trying to climb back in the swing on top of P. P screamed.

Me: (After seeing that P was not responding after a short period of tiime – 10 secs ish) “L, I hear you asking for a turn on the swing. P doesn’t seem finished yet.”

L hopped back, moved away from the swing and began playing with a doll.

P used her feet on the floor to push herself for a little while longer (maybe two minutes) before climbing out and leaving the room.

L climbed in the swing and began pushing herself.

I returned to the dishes.

I was changing P’s nappy on her change table. There is a bed that backs onto the change table that L had climbed on to help me. P had picked up a little dog-shaped felt piece from the change table caddy and was looking at it. L, standing next to her, took it from her. P immediately began crying in protest.

Me:”’P you had that felt dog, now L has it.” [Pause while offering comforting body language] “I hear how upset you are!”

L: Hands back the dog with a pleasant, “Here you go!” Then sits in a washing basket on the bed moving right over to one side and calling to P, “’Here P, I made a spot for you.”

The girls then happily played in the washing basket for several minutes whilst I tidied the area.

Example three: Struggling over a toy

L was clippy clopping around the house on her hobby horse. After a while she put it down and moved to a different room to play with blocks. P came across the horse lying on the ground, picked it up and began riding it around the lounge room. L came back into the room and saw P with the horse.

L: “Noooo! That’s my horse!” and begins to try to pull the horse away from P.

P: Screams and holds on to the horse for dear life.

In this situation I have to move quickly but calmly to where the altercation is occurring. It is important that I can use my physical presence to block any acts of aggression or to ensure this struggle doesn’t end in pain for the children.

So with my hands poised at the ready I state between the shouts of protest: “You both want the horse. L, you were riding this horse earlier now P wants to use it.” [Pause]

L and P continue to struggle with the horse before L yanks it away from P and moves away.

I then support P who is crying “You really wanted that horse. I hear you,  you’re so upset.”

L then runs past and gets the other hobby horse from the cupboard and gives it to P.

Both girls clippy clopped around the house for a few more minutes before moving onto something else.

In this final scenario type, I find it particularly tempting to step in and stop the struggle as I worry that one of the girls might get pulled over especially when there is a bit of a strength difference between them but when I queried this with Janet she stated:

“When we put limits on the amount of struggle we allow, it sort of defeats the whole purpose…and actually encourages the children to push that limit.”

So I have had to learn to trust the children to sort through these themselves whilst being close by to prevent them from getting hurt.

Sportscasting really is the ultimate tool for coping with sibling rivalry between young children. When used correctly for any disagreement between children, siblings soon learn valuable skills of negotiation and conflict resolution and parents learn to see the value in letting these squabbles play out with minimal interference.

Could NOT Forcing a Toddler to Share Help With Sharing Conflicts? ~ Peaceful Parents Confident Kids 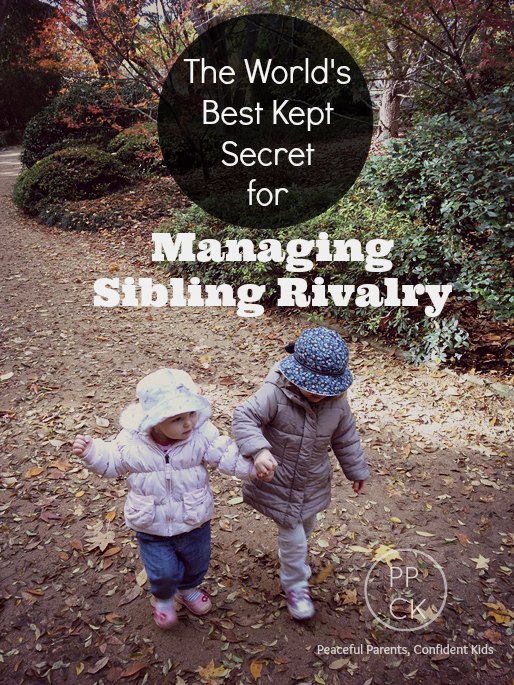