Sibling Rivalry has taken on a new meaning in our household over the past couple of months. Our children have both nominated themselves to compete in the Russell Household Olympics, competing in events such as Who is the fastest Dresser, Who Can Get to The Front Door First, Who Gets Strapped Into Their Car Seat First, Whose Milk is Poured Quickest, and Who is the Speediest Toilet Racer. 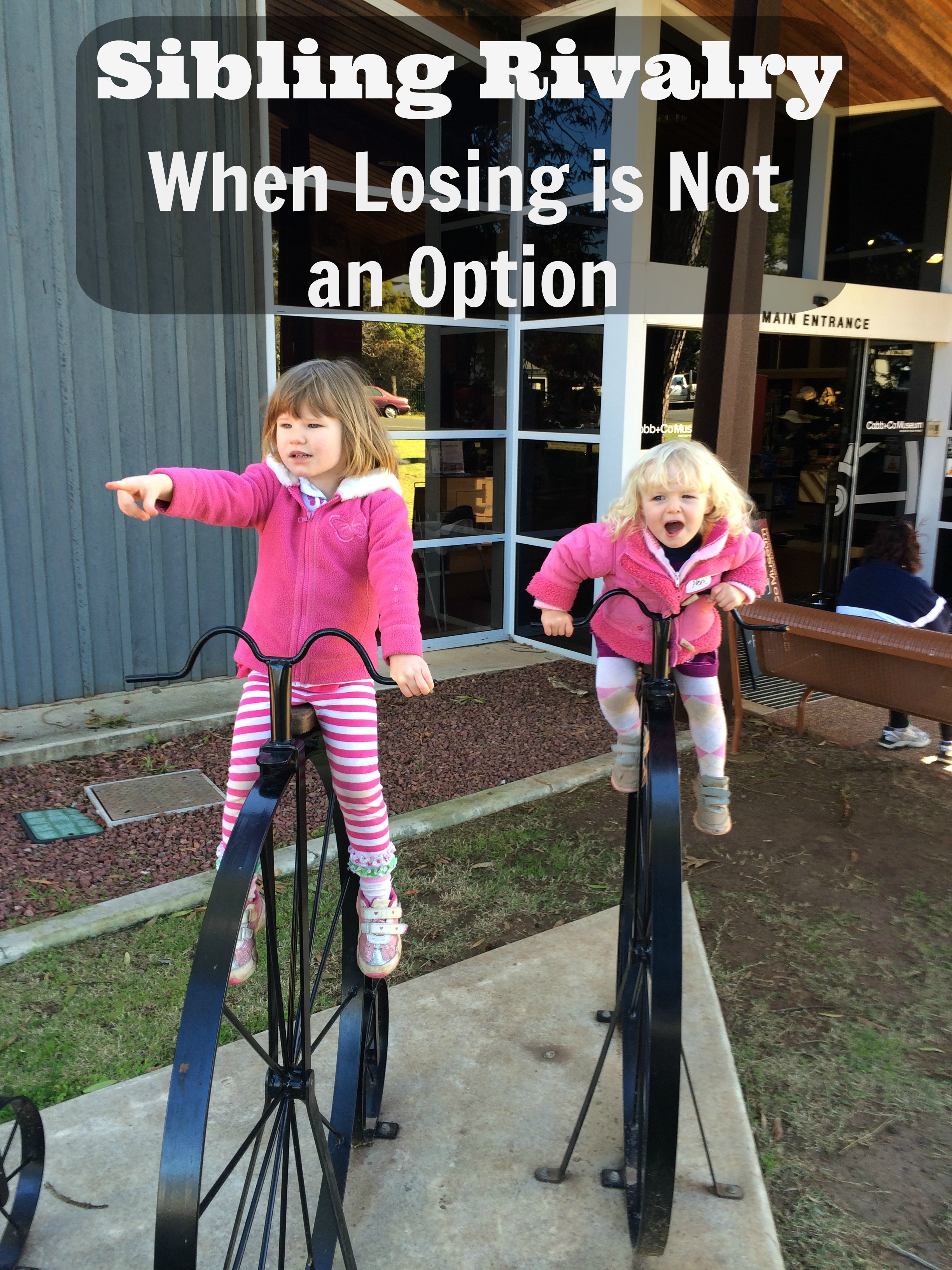 Yep, it doesn’t matter what it is, every aspect of our daily life has been turned into an Olympic event where the children genuinely feel as though they have worked their whole life leading up to that moment. It sounds great in theory, with the children moving in double time to complete tasks, we should never be late again nor lose our patience when the children take too long, but unfortunately the absolute devastation which ensues in the child that does not realise their dream of winning undermines the actual speediness of the event.

With my husband and I both being athletes and competing at high levels in Volleyball in the past, I guess it could be expected that my children would develop competitive streaks but gee whiz, we were never prepared for this. What confused us the most was that, we have consciously avoided pitting one child against the other deliberately avoiding using phrases like, “Who can get into the car first?” Or “Who can get their clothes on first?”, traditionally designed to manipulate children to move quickly through tasks.

So when my eldest daughter, Lucy, came home from care one day, stepped through the front door and turned and announced “I win!” to her bewildered sister, Penny, I wasn’t quite sure how to respond. Initially I thought I would downplay it and it would die a death along with the other “bum bum” and “poo poo head” phases previously experienced. This was made easy in the early days by the fact my youngest had no idea what her older sister was talking about and therefore, did not react.

Clearly, wanting to create a viable competition, Lucy persisted, often repeating herself to Penny in a tormenting tone “I win, Penny! Penny, I win, you lose! I beat you! Mummy, I beat her!” So whilst Penny was not sure what the words Lucy was saying meant, she started getting the feeling that whatever it was, she was coming off second best and she didn’t like it. Before long she had signed herself up for every competition going and I was unwittingly dragged in as an unpaid official.

Soon, we were being woken every morning to the sounds of “I beat you!” followed by the loser’s devastated wail of disappointment and plea against the integrity of the winners self-proclaimed victory. Akin to a world war with so much seemingly at stake for the participants, these Olympic Games were not for the faint-hearted.

As officials, my husband and I were there to ensure the safety of the competitors first and foremost and then to support the emotions of the losing competitor. This was becoming a difficult task with the meltdowns of the losing athlete taking up to an hour to dissipate. Keen to see the back of these championships, I tried a few different techniques.

At first I tried to make it stop. When I could see the children enter the starting blocks, I would be quick to let them know it was not a race and it didn’t matter who won. This did not work however, as in their minds, it was a race and boy-o-boy did it matter who won. What was I thinking? So I began to muse – how could I support my children through this phase and help them through the big feelings when they lost. I could hear my mentor Janet Lansbury in my head saying ‘Let feelings be!’ and I knew I needed to try. I needed to accept these competitions and allow them to run their course, staying unrattled about the big feelings which followed. So my attempt to do this began.

I continued to down play the competitions but used more sportscasting to help the children make sense of what was happening. When one child would announce their victory to their sibling (who was sometimes unaware they were even participating), I would say nothing unless there was persistence in the victor’s announcement or a protest by the loser in which case I would sportscast: “Lucy, you are saying that you got your cup out of the cupboard before Penny. Penny, you are upset.” Then I would acknowledge feelings for as long as I needed to.

This method helped to provide me with the unbiased words I needed to use as the children sorted through their differences and I think it gave the girls an opportunity to learn how to cope with these difficult experiences in a supportive environment, but as months went on and more and more competitions entered our day, the impact on the functioning of our daily lives was getting extreme. It seemed the children were stuck in a competitive rut, addicted to the power they felt as a winner, and my patience was wearing thin.

This was amplified by the fact that the competitions often occurred on the way out the door with the race to get into the car seat first a hotly contested event. I was always dragged into this one because whose door was opened and whose straps were buckled first ultimately decided the winner. Then began the long-winded process to convince the losing party to also get into their seat and get their belt on.

I needed to help them realise that doing something faster, better, stronger or just first was not as important as they were imagining it to be. The victor was being afforded too much power by the reactions of the losing party and starting to seek this powerful feeling by ensuring the loser was well aware that they lost and should be feeling miserable. Their proud announcement of coming out on top was always directed straight at their competition with little regard for sportsmanship.

To help manage this uncomfortable level of power I needed to take some of the sting out of these loaded victory statements. I decided I could do this by countering the statement with a light-hearted but meaningful statement of my own. So when one of them proclaimed “I beat you/ her!” I would say “And I love you/ her” in a similar announcing type tone. They would look at me strangely and then look at the loser and repeat their words, clearly looking for the reaction. I would then repeat my statement and so on. Sometimes I would add a little rhyme, “I love you when you win and I love you when you lose, I love you in the sun and I love you in the moon.”

It has surprised me how well this method has worked. There are still races to get to the shower first, requests to pour their milk first and sprints to get to the car door first but now the fall-out is much less. The losing party is starting to realise that losing is not so bad. Nothing bad really happens and their parents love them just the same. The victor now seems far more comfortable with the power they get from winning and does not seem so caught up in displaying the unsportsmanlike behaviour of rubbing the loser’s nose in it. Sometimes I even hear my eldest respond to her sister’s victory proclamation, “I beat you!” with, “That’s ok. I love you!”

I am so pleased to see the closing ceremony for these Games in sight and in the meantime I hope my children feel more confident to cope with such adverse situations and realise the strength of their own resilience when things don’t quite go their way. They sure seem to.

3 thoughts on “Sibling Rivalry: When Losing is Not an Option”