Children create mess, that we can be sure of. But how much mess is too much? Should  children take more responsibility and tidy up after themselves? It obviously comes down to the ages of our children and our own tolerance levels but when children upend baskets of toys, take their art work to the wall, pull towels out of the linen cupboard as props for their play and empty the clothes out of their drawers to make jumping castles, there comes a time when it is ok to say ENOUGH! 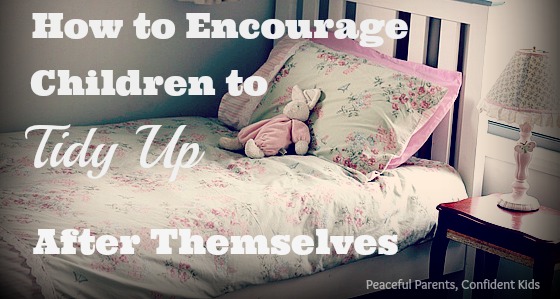 It is no secret that I value the benefits of free, independent play. I have made concerted efforts to stay out of the girl’s play. I aim not to direct them or show them how to make their play more exciting and instead give them the space to be the masterminds of their own games. As a result, I have a 4 year old and a 3 year old who have the most vivid and exciting imaginations that now see them being able to create long lasting adventures with little more than basic household items.

So, whilst I love this about my children, along the way, I have felt my tolerance to the almighty mess and destruction that inevitably ensues with their play, wane. Where once I considered emptying out a basket of figurines, a box of musical instruments and container of blocks on top of each other in the playroom to make a castle or using books as shoes to slide around on the tiles or pulling all the sheets off the guest bedroom to make a cubby an important part of my toddlers’ exploration and discovery, I am starting to see that this type of play is not always necessary for them to express their creative sides. Furthermore, I am starting to see that they are now at an age where they have the capability to tidy up after themselves with guidance.

My tolerance for mess has always actually been quite low and certainly much less than my husband’s, so on days I worked and he watched the children, I would come home and find every cupboard emptied on the floor, every toy out of its container and very little floor space to even walk through the front door. It was always such an epic task to clean up on these days that I used to dread them.

At that time, we were operating under the notion that as long as the children were playing contentedly together (which was such a relief after years of physical altercations between them), we would let them be. But after a third pair of shoes of mine was destroyed and another item of my clothing torn, I had had enough!

It was actually something that Janet Lansbury said to me that spurred me on to make a change. She said “Kate, the girls do not have to destroy when they play. This type of behaviour is testing and it is fine to set a limit if you are not ok with it!” The penny dropped and I knew it was time to set a limit.

I showed my husband Janet’s words to get him on board and he reluctantly agreed. This limit was going to need consistent enforcing in order to undo the bad habits that had crept into the children’s play. It was also going to mean having to interrupt cooperative play between the girls which we were loathe to do.

We made four key changes which have had a significant impact on reducing not only the destructive play but the overall messiness of the house.

1. Reduce the number of toys

Over the years we have accumulated many toys. We have tried to limit the number of toys we have out but it occurred to me recently that an excessive amount of toys have crept their way into the baskets the children have access to. Not only does this mean it is harder for them to find what they are looking for but it also means that when the contents are up-ended, there is an instant floor-full of mess in that area. The sheer number of items scattered around consequently seems highly daunting not just for the children to tidy up but for us, the parents also.

So I culled. I selected just 20 pieces of duplo out of a large wheelie bin full of it and placed them in a basket for the girls to use. I put the rest in a cupboard out of reach. Similarly, I halved the number of dress up clothes and accessories in the dress up boxes and put the rest away. I repeated this for all the toys in the bedrooms and play room. Less play food, less figurines, less blocks, less balls. Just less of everything.

The girls did not even notice that many of their things were missing. They continued to play the same games and the same role playing adventures but with less items at their disposal, the mess left on the floor was therefore, proportionally reduced.

2. Prevention is better than cure

We determined that the best way to help our children out of the habit of playing destructively was to be proactive and use a prevention is better than cure model. We needed to be constantly checking in on them – especially if they were being unusually quiet. We needed to stop them dumping all the clothes out of their drawers before the large pile grew and began being used as a trampoline. The books needed to be monitored before they ended up in a long winding path of stepping stones through the house leading to a swimming pool of books at the end.

Initially, it was hard for us to stop our children engaging in such creative play. It felt stifling but the fact remained that the mess created was far too great to have them clean it up and we were becoming more and more stressed and snowed under with the workload we were facing in the aftermath.

So we persisted. If they disappeared to their room, we followed soon after to let them know we did not want them to empty out their drawers etc. We would offer them a related alternative such as inviting them to play with the basket of dress up clothing we had set aside for them in their play room instead. There was initial resistance to this change but we firmly and confidently stated the expectation and then stayed long enough to block attempts to  continue until they began to understand that we were indeed not going to let them play with their clothes in this way.

3. State the tidy up expectation in advance

The next step in our quest for a tidier home was to increase the expectations we had of our children with regards to clean up. Firstly, I would let them know as I watched them pick up a basket of blocks and start to tip it up, that they would be required to pick the blocks up once they were done playing and to ask them if they were sure they needed to tip over the basket.

This methodology was then applied to all facets of their play. If they rifled through the dolls clothes to find the perfect outfit for their dolls, I would remind them that they would need to pick the clothes off the floor once they had found what they needed. I would also ask them if they did in fact need to fling everything behind them like a dog digging in the sand pit to find what they were after. We would talk about other ways they could find what they were looking for without making such a mess.

Teaching them ways to reign in their own mess as well as stating the expectations for clean up in advance helped them to think more carefully about how they were choosing to play with their toys.

This was integral in encouraging children to become less destructive in their play. One of my children, who is naturally much tidier and fastidious about things being in the correct spot, jumped right on board in making sure toys were tidied after her and before any major transitions took place.

My other (older) daughter took more convincing and we had numerous stand offs before she realised this was a limit here to stay. I would let her know it was time to tidy her toys once it was clear she had moved on to a different activity or a different room or it was time to transition. I would restate the expectation: “I see you are done with your blocks, they need to be picked up before you move on to your new game/ have lunch etc.” If it was a project she would be working on for a longer period of time, I made exceptions but usually this was not the case.

I would always offer to help out of the spirit of modelling helpfulness and kindness. The expectation though would be that she make a reasonable input into the clean up. I was happy to do the lion’s share but I would not allow her to move onto a different activity until the clean up was complete. If I felt she was not at all contributing to the clean up, I would say “It can be hard cleaning up can’t it. Can you tell me what you think you might be able to pick up. I will stay here to help you.” Usually she was able to nominate a few blocks or books and then follow through with those whilst I helped with the rest.

If she was feeling particularly objectionable I would then state: Are you feeling too tired to clean at the moment? If you need to have a rest, I can take you to your room for a lie down and we can do this when you feel more energetic.” Occasionally, but rarely, she held strong in not wanting to help out so I would help her to her room and let her know when she was feeling rested she could come out and finish tidying her things.

Often times she would come back within seconds and jump straight in to help. This was a new expectation for her so she needed help to realise that the expectation would be held and she would be required to contribute even if it was only a couple of blocks.

After several weeks of focusing on this change to our daily lives, the girls now know the expectations and are much less inclined to randomly dump toys or play destructively. They are starting to put things away without prompting and our chaotic house has become far more manageable and peaceful as a result.